The growth-linked New Zealand Dollar managed to hang on to most of its gains over the past 24 hours despite a downturn in sentiment during the final hours of the North American trading session. That sent the Dow Jones and S&P 500 -1.59% and -1.05% respectively as my Wall Street index rejected critical resistance from April. The anti-risk Japanese Yen trimmed losses as the haven-linked US Dollar ended relatively flat.

Equities and the British Pound received a boost in late Asia Pacific trade when reports crossed the wires that the United Kingdom announced a new post-Brexit tariff regime. The plan would cut about GBP30 million in tariffs after the nation leaves the European Union following the 11-month transition period. This expires at the end of this year. This update reversed some weakness Sterling saw after Brexit talks recently disappointed.

Sentiment noticeably soured after Stat – a health-oriented US journalism company – criticized Moderna’s virus drug trial study that sent markets soaring yesterday. The report said that the company withheld ‘key information’ about its Covid-19 vaccine. It also highlighted that the study did not produce enough critical data in order to assess its success.

In the White House, President Donald Trump said today that ‘there is tremendous progress’ on a vaccine and that the country is ‘way ahead’ of schedule on cures. Meanwhile Fed Chair Jerome Powell and Treasury Secretary Steven Mnuchin testified before the Senate. The former warned that lasting unemployment could weigh on the economy for years as the latter anticipated economic improvements in the second half of 2020.

Asia Pacific benchmark stock indexes – such as the Nikkei 225 and ASX 200 – could follow the pessimistic mood from the Wall Street trading session. That may continue to drain some of the gains NZD/USD accumulated as of late. A deterioration in market mood may also help to alleviate some declines the Yen and US Dollar experienced.

NZD/USD seems to have set a third lower high since prices appeared to peak in late April. Prices paused the latest bounce just under key resistance which is a range between 0.6130 – 0.6156. Prices appear to be facing immediate support at 0.6069. A turn lower from here places the focus on the 0.5989 – 0.6014 inflection range. Beyond that area sits 0.5918. Uptrend resumption through resistance exposes 0.6190. 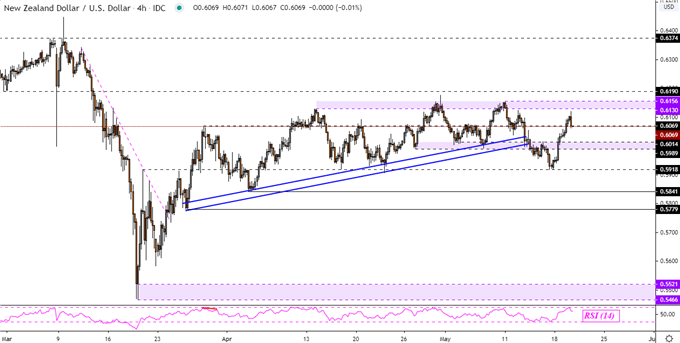