The British Pound declined on Friday as Brexit talks fell short of making meaningful progress. Michel Barnier – the EU’s chief Brexit negotiator – mentioned that he is ‘not optimistic’ about talks. Across the English Channel, the top UK negotiator David Frost said that ‘very little progress’ was made toward the EU pact. With both sides appearing to head for a stalemate, further uncertainty took to its toll on Sterling amid the Covid-19 outbreak.

The S&P 500 and Dow Jones rose 0.25% and 0.39% respectively in a rather quiet session. A couple of developments undercut more robust risk appetite. Fears of US-China trade tensions escalated as the White House moved to cut Huawei off from global chip suppliers. According to a person close to the Chinese government, the nation is ready to take countermeasures. This may include suspending Boeing airplane purchases.

Retail sales in the world’s largest economy contracted -16.4% m/m in April which both missed expectations and was the sharpest drop on record. A final push from equities into Wall Street close trimmed earlier losses. Still, the haven-linked US Dollar outperformed as well as the similarly-behaving Japanese Yen. The growth-linked Australian Dollar depreciated.

Top-tier event risk during Monday’s Asia Pacific trading session includes first-quarter Japanese GDP data. If it sours sentiment by further revealing the headwinds global growth is facing amid the coronavirus, the Japanese Yen could appreciate. This is as the Federal Reserve warned on Friday that there could be a ‘major decline in asset prices’ if the pandemic worsens.

The drop in GBP/USD Friday meant that Sterling broke under key support which is a range between 1.2163 – 1.2228. Thus the pair has exited its persistent consolidative mode in play since late March. Yet technical confirmation is lacking at this point, a confirmatory downside close could set the stage for deeper losses. This is as prices could face former lows from 2017 and 2016 between 1.1950 – 1.2018. 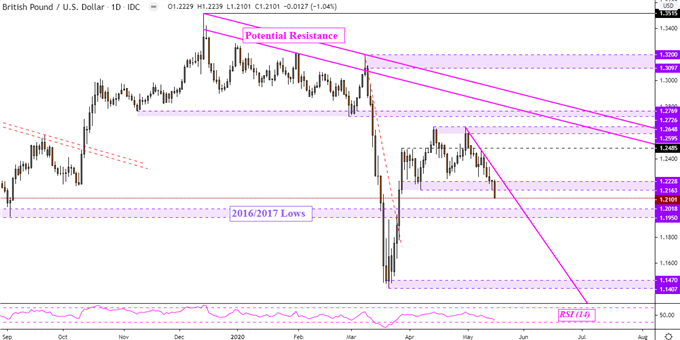