S&P 500 Forecast, at Turning Point? Australian Dollar May be at Risk

The S&P 500 gapped higher to begin this week’s session, pulling the sentiment-linked Australian Dollar in its direction as the haven-oriented US Dollar depreciated. Most of the upbeat tone from financial markets occurred during the Asia Pacific trading session – as expected. A reduction in credit market stress ahead of the FOMC policy decision later this week as virus case growth slowed may have also played a key role here.

Upside momentum from investors during the Wall Street session may have slowed as traders remained hesitant to commit on a directional bias. The 5 largest members of the S&P 500 are reporting earnings ahead. There continued being a divergence between broad market sentiment and crude oil prices. This could have been due to a combination of a lack in the belief that OPEC+ cuts could boost prices as demand remains notably suppressed.

Reports crossed the wires later in the day that US Covid-19 cases only rose 2.3% over the past 24 hours, marking the slowest pace since this month began. Meanwhile the Federal Reserve expanded the scope of the Municipal Liquidity Facility to cover smaller countries and cities. Anti-fiat gold prices declined despite weakness in USD, weakening as local government bond yields rallied with stocks.

Asia Pacific equities could follow Wall Street higher, alluding to a rosy session ahead which would likely bode well for the Australian Dollar. Yet there is a cautious “risk-off” tilt after US President Donald Trump expressed his displeasure with China. He added that “we are doing serious investigations on China and the virus”. Perhaps that has stoked woes of future economic retaliation that could come in the form of tariffs.

What are some unique aspects of trading forex?

The S&P 500 could be at a turning point from a technical perspective. Prices are attempting to push through the April 17 high as negative RSI divergence forms in the background. That is a sign of fading momentum which can precede a turn lower if resistance holds at 2885 on the daily chart below. The S&P 500 also appears to be trading within a Rising Wedge bearish reversal pattern since last month’s bottom. 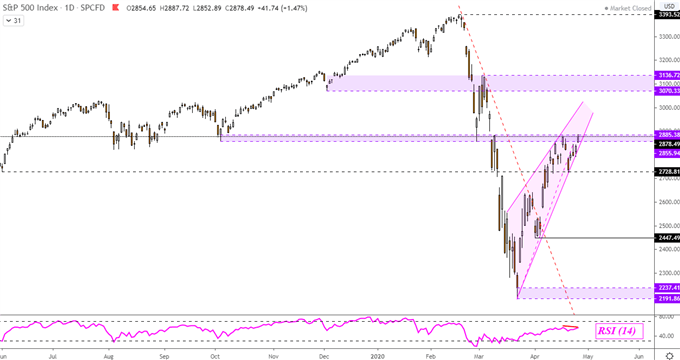