The anti-risk Japanese Yen struggled to capitalize on a volatile day for global equities which swung between gains and losses. Wall Street was unable to rally at the extent European markets were, with the Dow Jones and S&P 500 closing 0.95% and 0.47% to the upside. Rather, It was the haven-linked US Dollar that outperformed as the world’s most-liquidity currency, sending USD/JPY aggressively higher.

Over the past 24 hours, major central banks dialed up stimulatory measures in what has been a coordinated global move. The European Central Bank started a new quantitative easing program. The Reserve Bank of Australia cut rates and introduced yield curve control. The Bank of England also reduced benchmark lending rates and increased a bond purchasing program. These were emergency inter-meeting decisions.

Investors were digesting this new wave of stimulus as the VIX “fear gauge” eased off 2008 peaks. Meanwhile in the United States, the government is working on a potential fiscal package that could include tax rebates of $1,200 per individual and $2,400 for married couples. These are phased out for incomes exceeding certain thresholds. Meanwhile, unemployment claims soared last week at a velocity previously matched in 2012.

There was a bounce in crude oil prices as WTI rose almost 24 percent over the course of 24 hours. The Canadian Dollar - which can at times follow crude due to the commodity being a key source of local revenue – saw cautious gains and finished little changed against the US Dollar. The sentiment-linked Australian and New Zealand Dollars managed to draw out some gains.

AUD/USD received a boost after the Reserve Bank of Australia announced that it is offering to buy up to A$5 billion in government securities. These stimulatory measures may offer a boost to local stock markets as this week wraps up, perhaps boosting the Aussie. Follow-through is no guarantee in these uncertain times however.

S&P 500 futures are still pointing notably lower heading into Friday’s Asia Pacific trading session. That could spell a cautiously “risk-off” tilt in equities to come. Such conditions may extend gains in the US Dollar as it continues to outpace the Japanese Yen.

On the 4-hour chart, USD/JPY has extended its uptrend from March 9 after taking out falling resistance from February. Two levels of rising support – “inner” and “outer” – on the chart below appear to be guiding the pair higher. USD/JPY is thus approaching peaks from 2019 and what has been this year’s high. That makes for a range of resistance between 111.92 and 112.30 that may put a pause on gains. 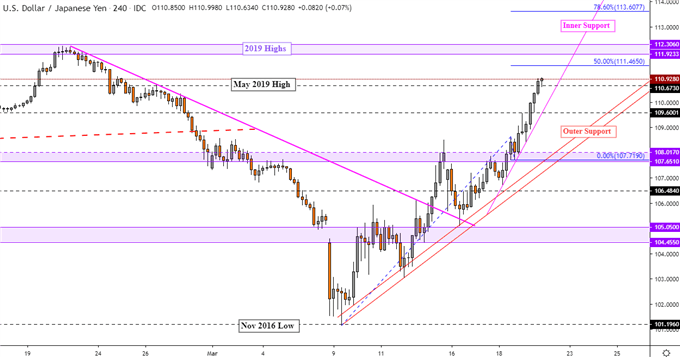