The Euro surged in a volatile knee-jerk reaction to the European Central Bank which announced additional quantitative easing measures. The ECB offered an extra emergency pandemic asset program worth about 750 billion Euros. Heading into the announcement, the central bank’s governing council was holding an emergency call on the coronavirus response effort which offered an initial boost to market sentiment.

These measures cover private and public sector securities and are anticipated to continue until the end of 2020. They will include Greek debt under a waiver. Christine Lagarde, the ECB’s President, said that there are “no limits” to their commitment to the Euro. This seened to be in the spirit of former head Mario Draghi when he said the ECB will do “whatever it takes” to preserve the Euro amid the 2011-12 Eurozone debt crisis

Today’s actions followed last week’s policy announcement where the central bank increased th size of an already-running QE program. Gains in EUR/USD likely had the most to do with the ECB's action bolstering sentiment. S&P 500 and DAX futures pushed higher on the headlines, undermining the need for an immediate haven such as the highly-liquid US Dollar. The anti-risk Japanese Yen weakened. 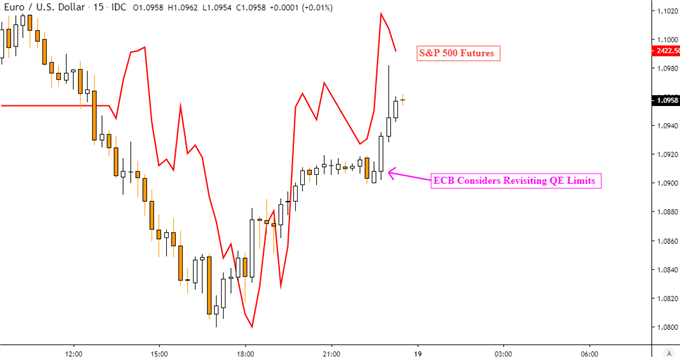 The US Dollar soared on Wednesday as the global rout in equities picked up momentum, pushing the Greenback towards what could be its best month since October 2008. The Dow Jones and S&P 500 closed -6.30% and -5.18% to the downside. In fact, Wall Street indexes are making an attempt to overturn decade-old rising support, which risks prolonging the bear market. Emerging markets face a similar fate. Over the past 24 hours, confirmed coronavirus cases in Europe surpassed those in China.

With sentiment improving, Thursday’s Asia Pacific trading session may see a broadly “risk-on” tone. On top of the measures from the ECB, the U.S. Senate signed off on a coronavirus relief bill which is likely to get signed into law by President Donald Trump. At 3:30 GMT the Reserve Bank of Australia will host an inter-meeting rate decision which will be followed by a press conference with Governor Philip Lowe.

On top of what could be further rate cuts, the markets seem to be expecting that the RBA could launch unconventional tools of its own. As such, the Australian jobs report may be brushed aside. With that in mind, a combination of these developments may even offer a boost to the growth-linked Australian Dollar if the RBA inspires the ASX 200 to bounce. In these uncertain times, follow-through is hardly guaranteed.

On the 4-hour chart, EUR/USD has bounced off the 38.2% Fibonacci extension at 1.0838. This has resulted in the Euro pressuring “inner resistance” which if taken out, may result in a test of “outer resistance”. The latter is maintaining the dominant downtrend from this month’s top. That may come into focus down the road in the event of a prolonged rise. If it holds, then we may see EUR/USD resume its steady push lower.