The Canadian Dollar rose with “pro-risk” crude oil prices as stock markets aggressively rallied on bets of a coordinated effort from central banks to support growth amid the coronavirus outbreak. Probabilities of an immediate rate cut from the Federal Reserve, Bank of Canada, European Central Bank, Bank of England, Reserve Bank of Australia and Reserve Bank of New Zealand are either fully priced in or above 50%.

The S&P 500, Dow Jones and Nasdaq rose 4.6%, 5.1% and 4.5% respectively immediately after the worst week on Wall Street since 2008. This is as coronavirus cases continued growing outside of China, with those in Iran jumping over 500 bringing the local total to 1,501. U.S. Vice President Mike Pence announced that the country has at this point recorded 43 cases.

Recommended by Daniel Dubrovsky
New to forex? Check out our guide!
Get My Guide

As a result, the anti-risk Japanese Yen was one of the worst-performing majors to start the new week. The haven-linked US Dollar also underperformed with its relatively high yield at risk. This is as the British Pound also suffered as the BoE announced that it will take “all necessary steps” to protect financial and monetary stability. Local bond yields declined as GBP/USD aimed lower. The Euro soared, as expected.

S&P 500 futures are higher heading into Tuesday’s Asia Pacific trading session. Later today, G-7 finance ministers and central bank heads are going to hold an emergency teleconference to discuss the Wuhan virus outbreak. Expectations of a coordinated easing effort may continue driving sentiment higher, sinking the Japanese Yen. The limits of monetary policy easing in an era of low interest rates are a concern however.

That may place the focus on government and fiscal response which if proven lackluster, could induce a “risk-off’ tone. In the immediate sense, all eyes are on the Reserve Bank of Australia. Cash rate futures are fully pricing in 1 rate cut ahead of the G-7 call, leaving the RBA with only 2 cuts left before it may choose to undertake unconventional measures. That said, a cut today may bolster market confidence ahead of the call.

How will the RBA drive the Australian Dollar?
What Do Other Traders Buy/Sell Bets Say About Price Trends?
Register for webinar
Join now
Webinar has ended

From a purely technical standpoint, the Canadian Dollar may be setting up for a bullish reversal. My majors-based index – averaging CAD versus USD, JPY, GBP and EUR – just formed a Morning Star candlestick pattern on rising support from 2018. This is typically a bullish formation which with confirmation, may precede a bottom. 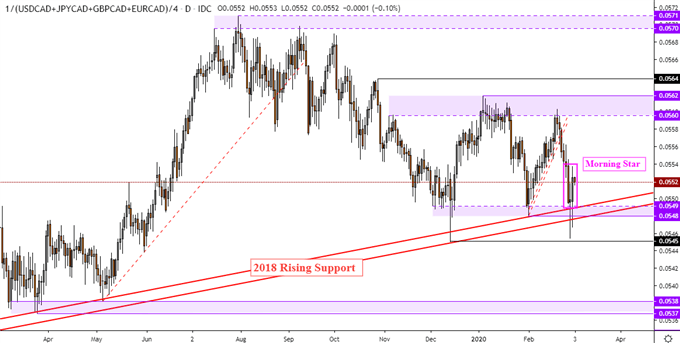 USD/CAD appeared to experience a false breakout through key resistance (1.339 – 1.3383). That said, rising support from January is maintaining the near-term upward technical bias. Negative RSI divergence did show earlier that upside momentum was fading. A close under the former alongside February lows may shift the immediate outlook towards the downside. 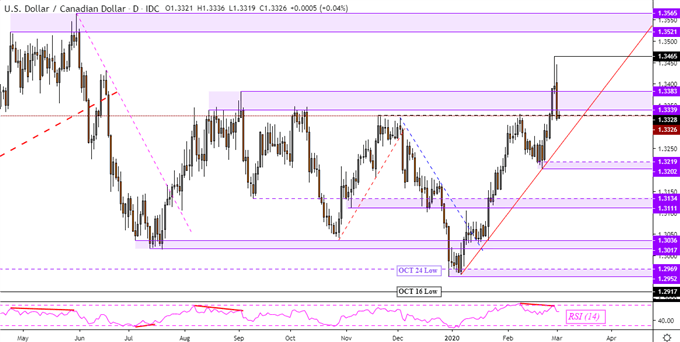