The British Pound was the best-performing major currency on Thursday alongside the anti-risk Japanese Yen. On the flip side of the spectrum, the sentiment-linked Australian Dollar and similarly-behaving New Zealand Dollar depreciated. GBP/USD rose as UK Chancellor Sajid Javid abruptly resigned amid Boris Johnson’s cabinet reshuffling, raising anticipation that the country could move towards fiscal stimulus.

This would undermine the case for monetary easing. Indeed, UK front-end government bond yields rallied, indicating the markets scaling back on dovish Bank of England monetary policy expectations. The FTSE 100 declined and closed at its lowest in over one week. There was also a cautious deterioration in market sentiment towards the end of the North American trading session.

The S&P 500 and Dow Jones initially brushed off an overnight surge in coronavirus cases as China revised the method for counting reports. As Wall Street opened for trading, the Fed injected a combined $78.85b in liquidity at its repurchasing operations to help keep its benchmark lending rate within the target range of 1.50 to 1.75%. The latest round of local CPI data also surprised to the upside, pushing bond yields higher.

However, equities fell after the central bank announced that it will go ahead with reducing the size of both term and overnight repo operations. Check out my collaborative special report with Analyst Peter Hanks where we discussed the importance of repos to equities and gold prices. Prospects of slightly less-liquid conditions fueled risk aversion, as expected, boosting JPY at the expense of the AUD and NZD.

The focus for foreign exchange markets will likely be on market mood given an absence of key economic event risk. S&P 500 futures are pointing cautiously lower, pointing to what may be a somewhat pessimistic trading environment ahead. China also reported 4,823 new cases alongside 116 coronavirus deaths on the second day of using the new counting method. Ahead, the Yen may see cautious gains as AUD weakens.

My majors-based British Pound index continues trading higher after prices adhered to the rising support channel from August. That has pushed GBP deeper into a key resistance range that consists of highs from 2018. Keep a close eye on RSI which may exhibit signs of negative divergence, showing fading upside momentum which can precede a turn lower. 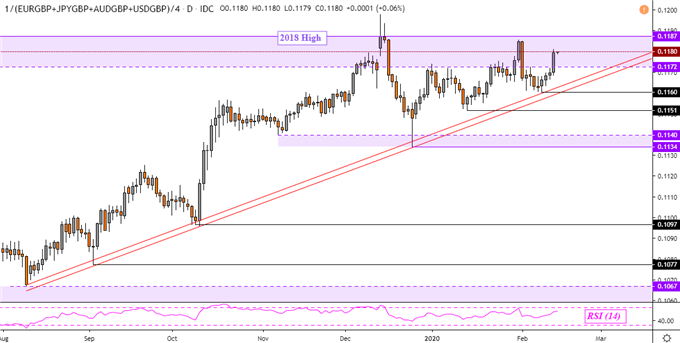