The Canadian Dollar gained against the US Dollar on Tuesday after rosy commentary from Fed Chair Jerome Powell. During his semiannual testimony to Congress, Mr Powell said that the U.S. economy “is in a very good place” offering upbeat analysis despite rising concerns on the coronavirus. Increasing local government bond yields signaled cooling dovish expectations, trimming prior gains in the Dow Jones and S&P 500.

This sent sentiment-linked crude oil prices lower as well, but WTI finished the day slightly higher amid gains in Asia Pacific and European equities. The United States is Canada’s largest trading partner and the upbeat assessment from Mr Powell may also entail positive knock-on effects on the latter. In other words, USD/CAD fell despite weaker crude as the markets became relatively less-dovish on Bank of Canada easing expectations.

The anti-risk Japanese Yen trimmed some of its earlier weakness against its major counterparts, ending the day only cautiously lower on average. On the flip side of the spectrum, the pro-risk Australian Dollar and similarly-behaving New Zealand Dollar only edged narrowly higher as overall market volatility remained fairly subdued.

Top-tier event risk during Wednesday’s Asia Pacific trading session is arguably the Reserve Bank of New Zealand interest rate announcement. I will be covering the event live starting at 00:45 GMT, see the link below to signup for the session. The central bank hasn’t delivered a policy announcement since November and odds of a 25-bp rate cut today are close to zero.

Technical signals in my majors-based New Zealand Dollar index show signs of fading downside momentum. That may precede a cautious rise in the Kiwi Dollar. Yet, Prime Minister Jacinda Ardern mentioned that the economy will be hit by the Wuhan virus. Expectations for an RBNZ rate cut by year-end are only at about 64% according to overnight index swaps. If there is room for further action, NZD/USD may fall rather.

USD/CAD may be at risk to turning lower from a technical standpoint. The pair formed an Evening Star which is a bearish candlestick formation. A further downside close under the rising trend line from late January may be confirmation that the Canadian Dollar could outperform its U.S. counterpart in the near-term. That places the focus on immediate support below at 1.3208. 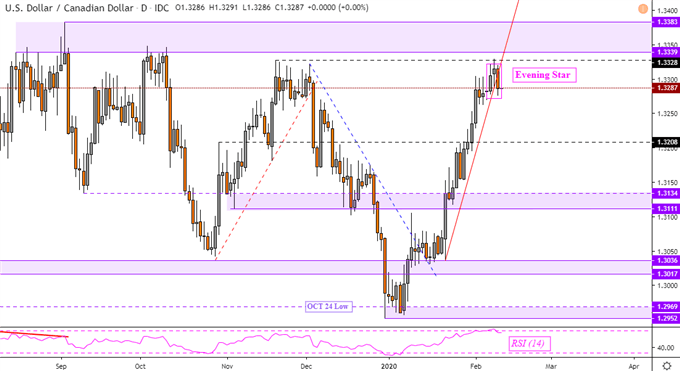