Australian Dollar Fell as the Japanese Yen and US Dollar Rose

The anti-risk Japanese Yen and haven-linked US Dollar were the best-performing majors on Friday. On the flip side, the pro-risk Australian Dollar and similarly-behaving New Zealand Dollar underperformed. This dynamic was a result of a deterioration in market mood despite a better-than-expected U.S. non-farm payrolls report. The S&P 500 and Dow Jones closed 0.54% and 0.94% to the downside respectively.

Investors focused their attention once more on concerns around the coronavirus after a nearly week-long hiatus. Japanese carmakers, such as Toyota and Honda, temporarily paused operations in China. The Federal Reserve also mentioned that the Wuhan virus is a “new threat”. After market close, China reported that total deaths reached 722 on the virus. Over the weekend, overall fatalities surpassed those of the SARS outbreak in 2003.

This is as growth in the Fed’s balance sheet slowed which is coinciding with plans to slowly ease the pace of repo operations over time. Such an outcome would lead to slightly less-liquid conditions, posing a risk to general market sentiment. For the time being, the selloff on Wall Street occurred as bets of a more-dovish Fed increased. Anti-fiat gold prices aimed cautiously higher.

With that in mind, we may see a cautious deterioration in market mood as the new week begins if Asia Pacific equities follow Wall Street lower. That may bode well for the Japanese Yen while coming at the expense of the Australian Dollar. The latter could brush off Chinese CPI data if foreign exchange markets remain glued to overall risk appetite.

The AUD/USD closed at its weakest level since 2009, though prices remain caught within key support. That is the psychological barrier between 0.6672 to 0.6701 which consists of the lows achieved in late 2019. Further downside progress exposes 0.6585. However, positive RSI divergence warns of fading downside momentum. This can at times precede a turn higher. Maintaining the near-term downtrend is a potential falling trend line from the beginning of January, 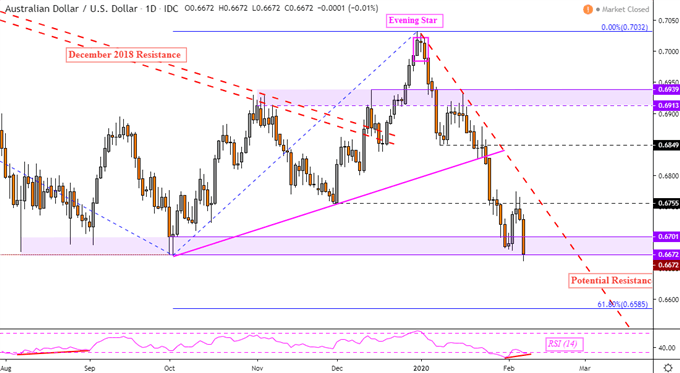