The pro-risk New Zealand Dollar and Australian Dollar rose on Tuesday amid an aggressive revival in risk appetite. That sent the S&P 500 rallying 1.5% in its best day since the middle of August as global markets shrugged off coronavirus concerns. Consequentially, the anti-risk Japanese Yen and similarly-behaving Swiss Franc underperformed against their major counterparts as demand for preserving capital faded.

Equities also likely received a boost from the latest repurchasing operations conducted by the Federal Reserve. A combination of overnight and 14-day term repos offered over $90b in near-term liquidity. As a result, we may see the central bank’s balance sheet continue swelling at tomorrow’s update. To learn more about why these are important for stocks and gold, check out my collaboration piece with Analyst Peter Hanks.

If markets continue shrugging off concerns about the Wuhan virus, we may see Asia Pacific benchmark stock indexes follow Wall Street higher. This is as China’s Hubei province reported an additional 3,156 cases along with 65 deaths for February 4th. The world’s second-largest economy may be at risk to slowing further in the first quarter, hurting global growth prospects which may dent the Australian Dollar.

In the near-term, AUD/USD may receive a boost when Philip Lowe, Governor of the Reserve Bank of Australia, speak later today. Mr Lowe may reiterate less-dovish than expected commentary from Tuesday’s interest rate hold. The Japanese Yen is at risk if regional bourses follow the rosy mood from the North American and European sessions.

The US Dollar may be at risk to the New Zealand Dollar after NZD/USD formed a Morning Star candlestick pattern. This is a bullish formation that with upside confirmation, may precede a turn higher. At this point, the near-term downtrend from late December is still in play, especially after the pair took out rising support from October. Overturning the bearish bias entails taking out the falling trend line from the end of last year. 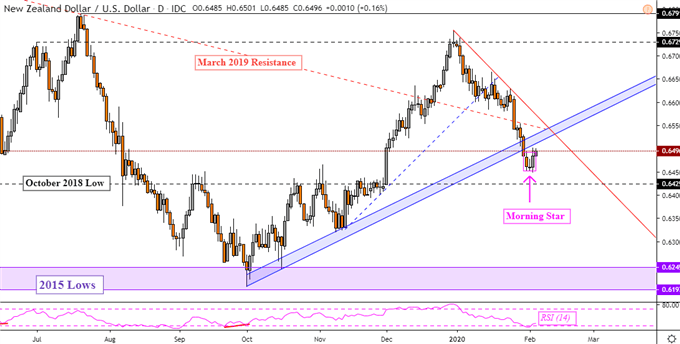