Japanese Yen, Euro and British Pound Gain Against the US Dollar as Stocks Sink

The Japanese Yen, British Pound and Euro were some of the best-performing major currencies on Friday. Fears of the coronavirus continued to spread into financial markets as the S&P 500 and Dow Jones erased their gains in January. The U.S. Centers for Disease Control and Prevention (CDC) called the Wuhan virus an unprecedented public health threat as the White House stepped up efforts to help quarantine the outbreak.

Concerns over the health of the global economy fueled expectations of easing from the United States. Fed funds futures are now fully baking in two 25-bp rate cuts by the end of the year. Falling front-end government bond yields also caused a closely-watched segment of the yield curve to invert, rekindling concerns about a recession for the first time since October.

With benchmark lending rates in the UK and EU so low, eroding prospects of the Greenback’s yield advantage likely sent it tumbling as EUR/USD and GBP/USD rose. However, if risk aversion in markets accelerates, the highly-liquid Dollar may soon recover its ground. The highest reading in the University of Michigan sentiment in 8 months did little to calm investors’ flight to safety

Recommended by Daniel Dubrovsky
What is the road ahead for equities in the first quarter?
Get My Guide

Chinese stock markets are expected to come online this week from the Lunar New Year, boosting lower-than-usual levels of liquidity. Expect downside gaps in the Shanghai Composite as regional bourses may follow the pessimistic lead on Wall Street. That may offer further support to the anti-risk Japanese Yen should the Nikkei 225 aim to the downside.

The “pro-risk” Australian Dollar may succumb to selling pressure alongside the similarly-behaving New Zealand Dollar. AUD/USD will also be closely watching Caixin China manufacturing PMI due to Australia’s close trading relationship with the world’s second-largest economy. Despite the coronavirus, Chinese economic news flow is tending to outperform relative to expectations on the whole as of late.

My majors-based Japanese Yen index has yet to clear highs achieved from the beginning of January. Taking this psychological barrier out would further confirm the break above falling resistance from August. That may spell medium-term strength to come for JPY on average against some of its major counterparts. 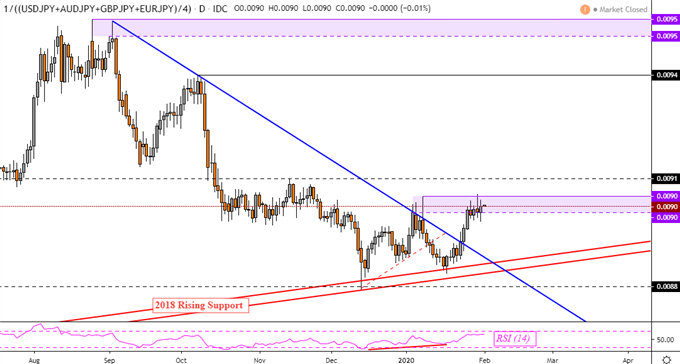