The anti-risk Japanese Yen underperformed against most of its major counterparts on Thursday while the US Dollar ended relatively flat. Better-than-expected retail sales out of the United States offered a boost to the Greenback and local government bond yields. USD cautiously weakened into the data release however, hence its flat overall performance. The S&P 500 and Dow Jones charged higher, rallying 0.84% and 0.92% respectively.

Curiously, the pro-risk Australian Dollar and New Zealand Dollar struggled to capitalize on the “risk-on” market tone. That may reflect the Greenback’s ultimate yield advantage over AUD and NZD, making it relatively more attractive when investor confidence is uplifted. Sentiment-linked crude oil prices on the other hand followed the rally in stocks.

There was a divergence between Wall Street and the MSCI Emerging Markets Index (EEM). The latter ended flat after an upside gap and intraday swings in volatility. The EEM has been struggling to capitalize on gains despite the US-China “phase one” trade agreement which might reflect doubts over a “phase two” accord. Better data out of the US may decrease dovish Fed policy bets, a worrying prospect for certain ASEAN economies.

Recommended by Daniel Dubrovsky
How can you trade around U.S. economic data?
Get My Guide

Attention turns to fourth-quarter Chinese GDP data, which is due at 2:00 GMT during Friday’s Asia Pacific trading session. Data out of the world’s second-largest economy has been tending to surprise to the upside as of late. That may pave the way for a similar print later today. China’s economy is expected to grow 6.0 percent y/y, the same pace as it did in Q3. Industrial production and retail sales will also simultaneously be released.

Rosy data would continue cooling fears about a slowdown in global growth and perhaps offer a boost to ASEAN currencies such as the SGD, IDR, PHP and MYR. That may offer a further lift to regional benchmark stock indexes such as the Nikkei 225. The Japanese Yen is thus looking more vulnerable and may continue weakening. Will the AUD/USD and NZD/USD be able to find some upside momentum?

USD/JPY continues to extend its uptrend from August after prices took out descending resistance from November 2018. Now the pair is facing the high from May 2019 at 110.67 which if taken out, exposes a potential falling trend line from late 2016/early 2017. Immediate support sits below at 109.92 which is the high from May 30. 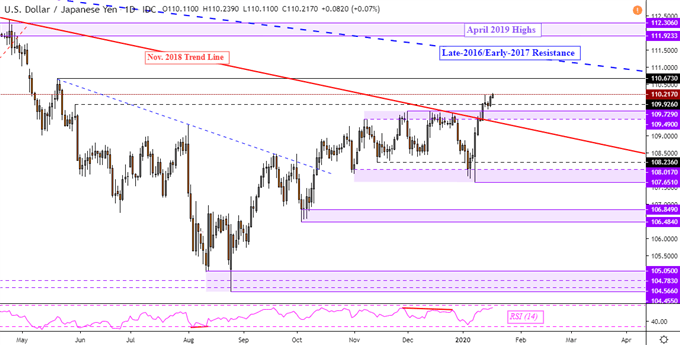