The US Dollar and local government bond yields aimed little lower on Wednesday in what was a rather quiet day for foreign exchange markets. This is despite the US and China signing the “phase one” trade deal. There was a rally in equities as sentiment improved in the lead-up to the signing. Yet some of this optimism faded once the two nations came to an accord at the White House. Still, the S&P 500 closed 0.19% higher.

This may have reflected a “buy the rumor and sell the fact” event for a couple of reasons. While there was a lifting of some tariffs, about $360b still remain against China that is dependent on a “phase two” agreement. The problem here is that the White House has hinted that this segment would most likely come after this year’s presidential election. This presents some uncertainty to the markets as the next leader is an unknown factor.

No specifics were offered on thorny issues such as intellectual property aside from broad commitments. Enforcement mechanisms were also left in place that would allow for retaliatory measures should either country break apart from promised provisions. The sentiment-linked Australian Dollar and similarly-behaving New Zealand Dollar tepidly weakened.

S&P 500 futures are pointing cautiously higher heading into Thursday’s Asia Pacific trading session. That could spell for a moderate “risk-on” tone as regional bourses react to the Wall Street trading session. This may pressure the anti-risk Japanese Yen as the AUD and NZD find some upside momentum. Recent signals from IG Client Sentiment seem to favor the upside scenario for USD/JPY and AUD/JPY as well.

Using my majors-based US Dollar index, which averages its performance against EUR, JPY, GBP and AUD, the Greenback is still committed to its dominant downtrend from August. Prices appear to be stalling under resistance which is a range between 1.2889 – 1.2921. Immediate support sits below at 1.2793 which if taken out, exposes lows from the beginning of January. 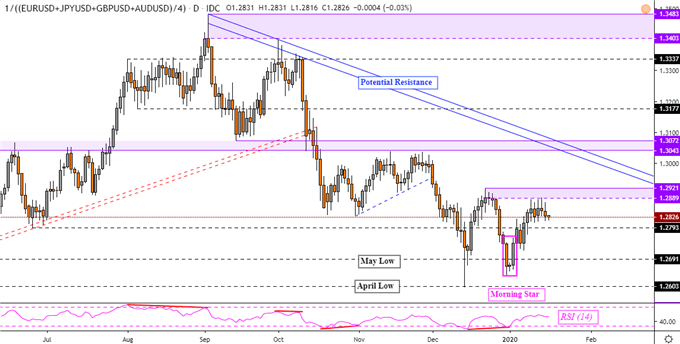