BREAKING NEWS: CRUDE OIL SURGES AS MUCH AS 4% ON US-IRAN RISK

Crude oil prices rose as much as 4.0 percent heading into Wednesday’s Asia Pacific trading session as geopolitical tensions between the United States and Iran are at risk to escalating further. The latter has confirmed at the time of this writing that an operation was launched to target the Ayn al-Asad base in Iraq that hosts troops from the former. Reports have cited at least 9 rockets hitting near the area.

S&P 500 futures aimed sharply lower and extended the selloff from the preceding Wall Street session. The anti-risk Japanese Yen is higher alongside a cautious uptick from the haven-linked US Dollar. The sentiment-linked Australian Dollar and New Zealand Dollar are lower, accelerating their selloff from Tuesday’s session. Anti-fiat gold prices are on the rise as bond yields tumble in Australia and may follow from the US.

Tensions between the two nations have been on the rise since US President Donald Trump ordered an airstrike that took out a top Iranian Revolutionary Guard general. The sides have been trading off verbal threats of escalation as of late. On Monday, conflict fears cautiously dissipated as equities rallied but the risk of further physical retaliation remained. Now all eyes are on the response from Washington and whether it proceeds further.

Recommended by Daniel Dubrovsky
What is the road ahead for oil in the first quarter?
Get My Guide 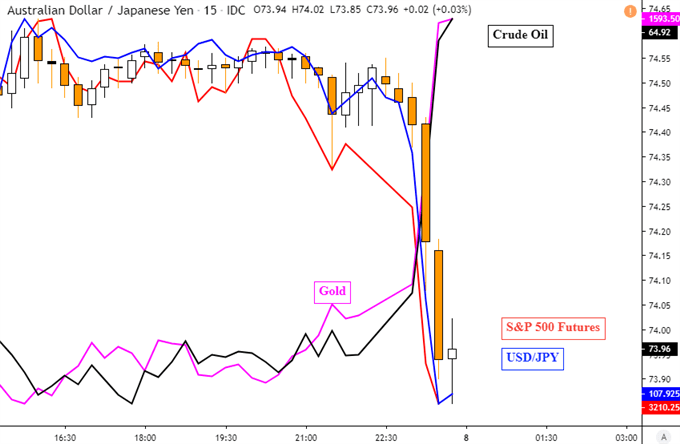 It was a generally sour day on Wall Street when during the early hours of European trade, Iran said that it was assessing 13 retaliation scenarios against the United States. Upbeat US ISM non-manufacturing helped put a temporary lid to the selloff as the S&P 500 closed just 0.28% to the downside. Though that was not enough to trim much of the losses from the Australian Dollar as it was the worst-performing major currency.

On a daily chart, crude oil prices are looking to take out highs from May and September of 2019. Those compose of the psychological barrier between 63.32 and 64.05. That has exposed the 2019 high at 66.58 which if taken out, may prolong the uptrend to face highs from late 2018. This is as the sentiment outlook for the commodity is bearish via IG Client Sentiment at the time of this writing. 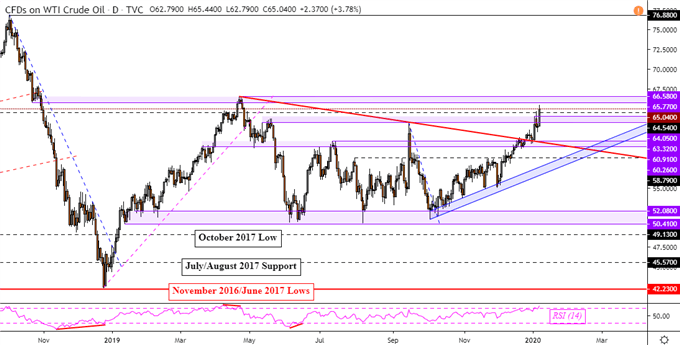