US Dollar Gains Vs Euro and British Pound

The US Dollar aimed cautiously higher against its major counterparts on Thursday. Markets are slowly coming online in the aftermath of year-end holiday liquidity drain. Some choppiness is still to be expected. Generally speaking, USD’s rise occurred despite gains in equities.

The haven-linked Greenback does boast one of the highest yields of the major currencies. That may have worked to its advantage in thinner trading conditions where a premium is placed on liquidity. Gains were the most prominent across the Atlantic Ocean where the Euro and British Pound underperformed.

Despite the 0.84% climb in the S&P 500, the anti-risk Japanese Yen puzzlingly outperformed. It should be noted that most of its rise occurred in the lead-up and immediate aftermath of Wall Street open. During this time, equities saw a cautious pullback before rallying into the close absent key event risk.

Some optimismahead of the expected US-China “phase-one” trade deal signing may have attributed the cautious “risk-on” tone. That is anticipated to occur on January 15. Newswires also cited the People’s Bank of China announcement to trim the reserve requirement ratio (RRR) by 50-basis points from January 6.

Friday’s Asia Pacific trading session is lacking notable event risk, placing the focus for foreign exchange markets on market mood. Japan is offline for a market holiday, exacerbating illiquid trading conditions. S&P 500 futures are pointing cautiously higher which may translate into the Yen trimming some of its gains.

Using my majors-based index, the US Dollar had its best day in over two weeks. This left behind a Morning Star using the daily chart below. This is a bullish candlestick pattern. We also have the presence of positive RSI divergence which shows fading downside momentum. With a confirmatory upside close, this could be another bottom for USD on the whole. 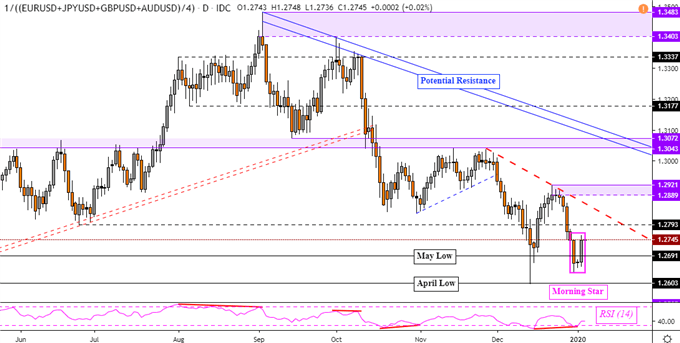