In thin trading conditions at the end of a shortened week due to the Christmas holiday, the haven-linked US Dollar and anti-risk Japanese Yen extend their declines. In particular, weakness in the Greenback was the most aggressive against the Euro which aimed higher throughout Friday’s session.

Generally, USD and JPY have been on the decline as of late with equities rallying up a storm in the aftermath of a US-China “phase one” trade agreement. However, the S&P 500 trimmed its upside gap to finish the day unchanged and local government bond yields declined absent major event risk.

This might have reflected a combination of profit taking, prepositioning or year-end portfolio adjustments. At a glance, it may have seemed like the pro-risk Australian and New Zealand Dollars appreciated. But their performance was largely skewed by volatile moves in USD. Their ascent slowed as Wall Street peaked.

The last partial week of 2019 begins with rather lackluster event risk and ever-still illiquid conditions with the focus on investor mood. Keep a close eye on AUD/USD and AUD/JPY which are increasingly appearing to begin 2020 on an aggressive bullish note as they aim for technical breakouts.

We have not seen such an aggressive climb in EUR/USD since early August after prices closed 0.72 percent to the upside. That was still not enough to take out the psychological barrier above between 1.1182 and 1.1200. A daily close above opens the door to reversing the downtrend from earlier this year. 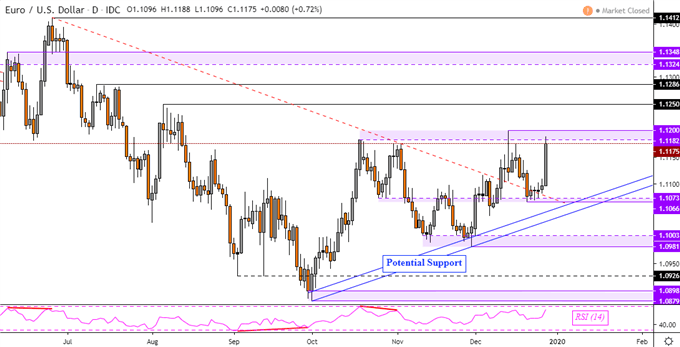