The pro-risk Australian Dollar and New Zealand Dollar soared as sentiment roared to life following a brief pause due to the Christmas holiday. This is as the anti-risk Japanese Yen and haven-linked US Dollar underperformed. Market conditions are still relatively illiquid as 2019 wraps up, making equities particularly sensitive to fundamental news.

The S&P 500 gained 0.51 percent as the tech-heavy NASDAQ closed above the 9,000 for the first time on record during Wall Street trade. Stocks received a boost shortly after trading began as Amazon, an e-commerce giant, reported that sales during the holiday season were “record breaking”. The stock gained 4.45% and closed at its highest since the beginning of August.

Anti-fiat gold prices soared as the greenback depreciated, extending a bullish breakout as anticipated. This is as sentiment-linked crude oil prices cleared key descending resistance from earlier this year, opening the door to a bullish breakout in the coming days.

Heading into the end of the week, Asia Pacific equities may follow Wall Street higher as the focus for foreign exchange markets arguably remains on risk trends. Top-tier event risk is rather lackluster. From a fundamental perspective, that may open the door to further weakness in the Japanese Yen which may also depreciate on trader positioning signals. This is as AUD and NZD may extend gains.

AUD/USD has managed a daily close above the key psychological barrier between 0.6894 and 0.6938. Last week, I noted that the Aussie was generally on its way to a bullish breakout from a technical perspective. This is looking to be increasingly the case and may mark a potential turning point for the currency as the dominant uptrend ensues. The next area of resistance appears to be above at 0.7003. 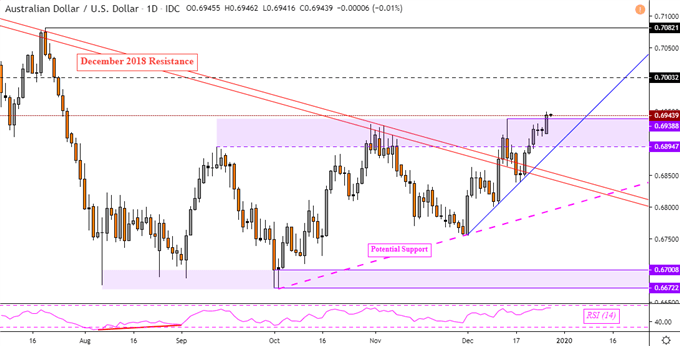 This also extends into AUD/JPY which closed at its highest since May. The pair may be on its way to confirm a break above an Ascending Triangle as it looks to overturn the downtrend from earlier this year. A daily close above 76.28 exposes the next psychological barrier between 77.49 to 77.90. Otherwise, a turn lower places the focus on rising support from August. 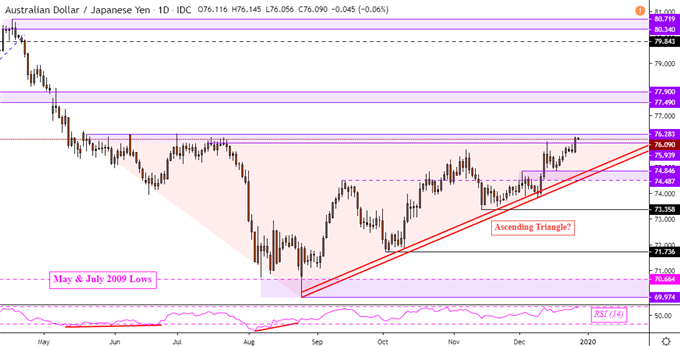