The US Dollar outperformed against most of its major counterparts, particularly versus the Euro on Friday. The currency had a couple of local economic data to look forward to. US personal consumption unexpectedly rose 3.2% in the third quarter versus 2.9% anticipated. This is as PCE core, the Fed’s preferred measure of inflation, clocked in at 1.6% y/y in November versus 1.5% expected.

Friday’s data helped continue diminishing 2020 Federal Reserve easing expectations, which reached the least dovish since March. Despite this, Wall Street continued its rally throughout the week which could be attributed to the improving outlook for global growth in the aftermath of the US-China “phase one” trade deal. Given the greenback’s relatively high yield, it may have capitalized on the “risk on” session.

The sentiment-risk Australian Dollar and similarly-behaving New Zealand Dollar also enjoyed a fairly rosy session. On the flip side of the spectrum, the Canadian Dollar underperformed. Canadian retail sales unexpectedly shrunk -1.2% m/m in October versus +0.5% anticipated. That was the worst outcome since November 2018, fueling near-term Bank of Canada rate cut bets.

The S&P 500 closed 0.49 percent to the upside on Friday, perhaps paving the way for Asia Pacific benchmark stock indexes to follow Wall Street higher. That could depress the anti-risk Japanese Yen while supporting the AUD and NZD. The Australian Dollar will also be closely watching private sector credit data with markets pricing in about a 50 percent chance of an RBA rate cut in March.

The EUR/USD experienced its worst week since the beginning of November as prices overturned the push above key falling resistance from June. Near-term declines are in focus after the Euro took out rising support from late November. A daily close under 1.1075 exposes what may be a psychological barrier where buyers may overcome selling pressure, blue line on the chart below. Immediate resistance stands at 1.1109.

Chart of the Day – EUR/USD 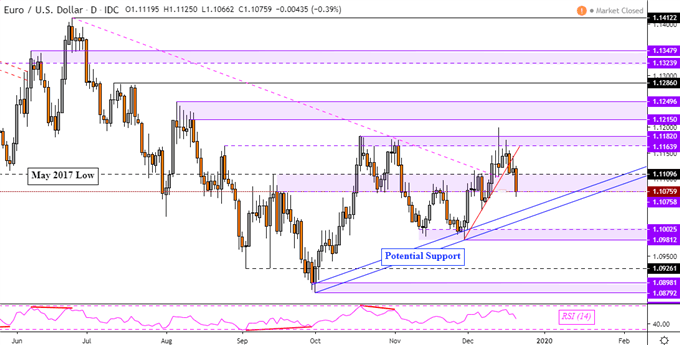