The Canadian Dollar rose against its major peers on Wednesday as a result of a combination of fundamental forces. Canadian 2-year government bond yields reached their highest since March on the latest local inflation report. Headline CPI clocked in at 2.2 percent y/y in November as expected. Median core inflation unexpectedly surged to 2.4%, the highest since March 2009. This cooled Bank of Canada easing bets.

Simultaneously, crude oil prices were on the rise. The commodity is a key source of revenue for Canada and can often have knock-on impacts on the economy. WTI oil rallied as the weekly EIA inventory report showed a drawdown of about 1.09m barrels last week. This was a stark contrast to reports from API yesterday showing a 4.7m bbl uptick in inventory.

The New Zealand Dollar also had a relatively rosy session, fueled by better-than-expected third quarter GDP data. On the flip side of the spectrum, the British Pound depreciated. Sterling has been on the decline since UK Prime Minister Boris Johnson alluded to ruling out an extension of the post-Brexit transition period. This has raised prospects of a no-deal departure from the European Union.

S&P 500 futures are little changed after a tepid session on Wall Street as optimism after the US-China “phase one” deal appears to be fading. That may point to a mixed start for equities and general market mood. The Australian Dollar is at risk to the upcoming local jobs report that may increase near-term RBA rate cut bets. The anti-risk Japanese Yen looks may brush aside another status quo Bank of Japan later today.

Within its consolidation since July, USD/CAD has extended its near-term downtrend as prices are being guided lower by a falling trend line from earlier this month. The currency pair paused its descent on key support which is a range between 1.3111 and 1.3134. A daily close under this area exposes lows from July while a push above descending resistance opens the door to revisiting highs from November. 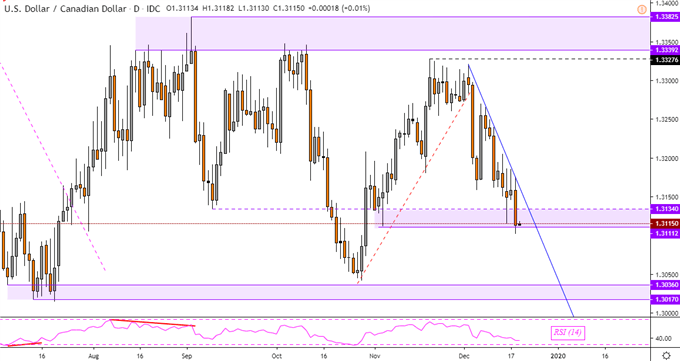