The British Pound is falling in early Tuesday trade as the reality of what last week’s UK general election means for Brexit sinks in. On the one hand, the comfortable Conservative majority makes for pushing through Prime Minister Boris Johnson’s withdrawal agreement relatively easier. On the other hand, a key campaign promise of his was rejecting an extension of the transition period beyond the December 31, 2020 deadline.

Reports crossed the wires that Mr Johnson would propose a law legally blocking the ability to extend the transition period deadline. That means that once the EU-UK withdrawal agreement is likely accepted in Parliament by January 31, the difficult road ahead for extensive trade talks could have a limited amount of time to be debated. In other words, it could raise the prospect of a no-deal Brexit and weaken GBP as expected.

The haven-linked US Dollar is rallying versus its major counterparts against this backdrop as the pro-risk Australian Dollar is seeing selling pressure. S&P 500 futures are also pointing cautiously lower ahead of the Asia Pacific trading session and could inspire a cautiously “risk-off” tilt ahead. This follows an overall rosy session on Wall Street where equities continued to reap the benefits of an interim US-China trade deal.

Ahead, in addition to paying close attention to risk appetite, the Australian Dollar will also be keeping a close eye on the minutes of the December RBA monetary policy announcement. The AUD could find support if the document continues to undermine aggressive easing bets. Some regional lending institutions have been raising expectations that the central bank could undergo unconventional measures such as quantitative easing.

The British Pound continues trimming gains against the US Dollar after failing to clear the key falling trend line from June 2015. Now, GBP/USD has left behind a Shooting Star candlestick which is a sign of indecision. A confirmatory close to the downside could precede a reversal of the uptrend from September. That places the focus on near-term support at 1.3177 and rising support from October.

Charts of the Day – GBP/USD 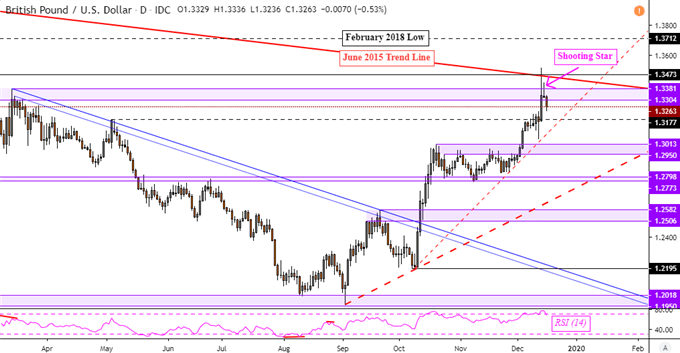