Join me later today to learn about this useful trading tool
What Do Other Traders' Buy/Sell Bets Say About Price Trends?
Register for webinar
Join now
Webinar has ended

The US Dollar is seeing a cautious boost heading into Wednesday’s Asia Pacific trading session, benefiting from broad weakness in the British Pound. Sterling has been on a remarkable recovery since August, rising alongside expectations of a UK Conservative Party majority at Thursday’s general election. That could make pushing through Prime Minister Boris Johnson’s Brexit deal easier, thus reducing uncertainty.

Those odds became somewhat less favorable after the latest key YouGov poll now envisioned a hung Parliament as within the margin of error. Simultaneous declines in the sentiment-linked Australian Dollar against the anti-risk US Dollar and Japanese Yen highlighted the risk of cross-market volatility should the Tories fail to achieve a majority later this week.

Declines in Sterling helped USD recover losses from Tuesday’s session where markets remained fixated on trade-related news. There was some back and forth in US-China updates. Reports first crossed the wires that the two sides were planning for a delay of the December tariffs. This was somewhat refuted by White House Acting Chief of Staff Mick Mulvaney who noted that it had more to do with how talks go until the deadline.

This is as the Canadian Dollar traded sideways on similar back and forth on the USMCA trade deal. The White House expressed its desire to push for its passage this year. Though Senate Majority Leader Mitch McConnel, who decides on what bills the floor will vote on, said that the chamber won’t finish the agreement this year. He added that it will have to follow any impeachment trial.

S&P 500 futures are pointing cautiously lower heading into Wednesday’s Asia Pacific trading session. Given that we have key event risk still ahead, such as the Fed and UK General Election, expect some degree of mixed trading in the major currencies. Investors may be hesitant to commit to directional bias until they pass. The anti-risk Japanese Yen may see cautious gains ahead, but follow-through could be lacking.

Using my majors-based US Dollar index, the Greenback paused its descent and was unable to clear key rising support from September 2018 – red channel on the chart below. This is as prices failed to push into the psychological barrier consisting of lows from June. A hold at support could pave the way for a bounce higher, perhaps towards the falling trend line from the end of September. 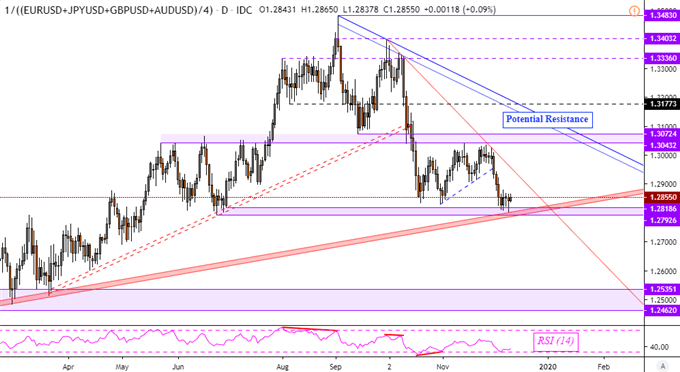