The Canadian Dollar outperformed on Monday, trimming some of its losses from the end of last week when a dismal local jobs report crossed the wires. The Loonie received a boost on optimism that the United States-Mexico-Canada Agreement (USMCA), Donald Trump’s replacement to NAFTA, could be approved soon. Canadian front-end government bond yields rose. For the bill to be passed, it needs local congressional approval.

Yet, reports crossed the wires later in the session from US House Speaker Nancy Pelosi that a final agreement has not been agreed to. US Trade Representative Robert Lighthizer and Trump’s Adviser Jared Kushner are expected to help finalize the trade deal in Mexico tomorrow. A full ratification of the USMCA will likely boost the Canadian Dollar and help alleviate the pain from last week’s jobs report.

Meanwhile, the sentiment-linked Australian Dollar and New Zealand Dollar underperformed against their major peers. While these currencies initially saw cautious optimism earlier on the day on USMCA trade deal bets, those gains diminished as Wall Street turned lower ahead of key event risk this week such as the Fed. Investors may have also been on the defensive as markets continue bracing for US-China trade deal updates.

During Tuesday’s Asia Pacific trading session, the Australian Dollar will be closely watching November Chinese CPI data. A softer-than-expected outcome may fuel further easing bets out of the world’s second-largest economy as the trade war remains unresolved. As the markets favored China liquid proxy, that may end up offering a cautious boost to AUD.

Still, follow-through may have to wait until an outcome on the December 15 tariff deadline is known. That is when Washington may raise levies against China at Trump’s discretion. Asia Pacific benchmark stock indexes could follow the S&P 500 (-0.32%) lower, weighing against the AUD and NZD. That may bode well for the anti-risk Japanese Yen.

AUD/CAD turned lower on Monday but it still remains within the boundaries of an Ascending Triangle. This is typically a bullish chart pattern. A break above the ceiling (0.9105 – 0.9144) could translate into a reversal of the dominant downtrend, sending the pair towards July highs. Guiding AUD/CAD higher is the floor, which is rising support from October.

Chart of the Day – AUD/CAD 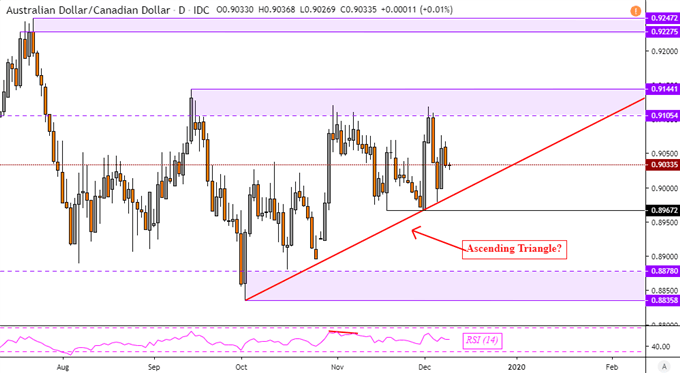