After persistent weakness, the US Dollar enjoyed some breathing space on Friday as it was supported by a slew of risk-positive news. It began with a stellar local jobs report, accelerating with rosy sentiment data and US-China trade deal optimism. By far the former had the most profound impact as the country added the most non-farm payrolls since January.

On the flip side of the spectrum, the Canadian Dollar was the worst performing major as it was hit by contrastingly disappointing employment data. Canada lost 71.2k positions, far undershooting economists’ estimates of a 10.0k uptick. Local bond yields tumbled, undermining last week’s Bank of Canada monetary policy announcement which pictured a more positive outlook on the economy.

Meanwhile, White House Economic Adviser Larry Kudlow offered some reassurance on US-China trade deal bets. He noted that an agreement “is still close” ahead of the December 15 deadline. That is when President Donald Trump may decide whether to raise tariffs against his Chinese counterpart, Xi Jinping. This past week, we have seen mixed commentary on the possibilities of a near-term deal.

With that in mind, we may see Asia Pacific equities follow Wall Street higher (S&P 500 +0.91%, Dow Jones +1.22%) at the onset of the new trading week. This may bode ill for the anti-risk Japanese Yen as it looks past local GDP data due to its limited implications for near-term BoJ monetary policy prospects. The sentiment-linked Australian and New Zealand Dollars may rise as the Canadian Dollar remains vulnerable to further selling pressure on dovish BoC bets.

Fundamental factors helped fuel USD/CAD and push it to its largest single-day gain since the beginning of October. Still, prices remain off November peaks after breaking under a near-term rising support line. That may keep the near-term bias lower unless the Canadian Dollar continues to see selling pressure in the days ahead. Immediate support lays below at 1.3158. 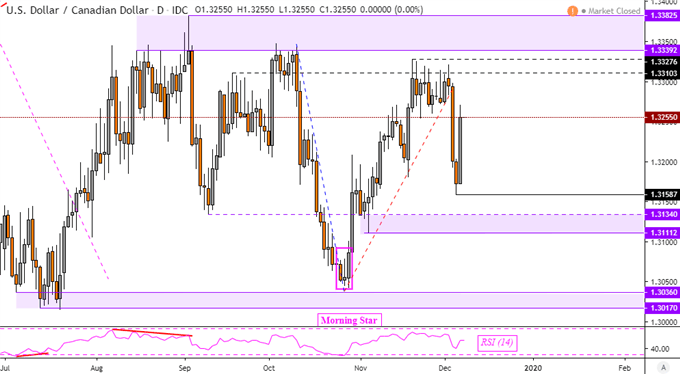