US Dollar Continues Descent, Especially Against the British Pound and Euro

The US Dollar extended its slump on Thursday as it headed for its worst weekly performance since the middle of October. It has been particularly losing ground against its liquid European counterparts such as the British Pound and Euro. The former has been gaining ground alongside prospects of a UK Conservative majority at next week’s general election. That would raise prospects of passing Boris Johnsons’ Brexit deal.

The USD extended its decline during the Wall Street trading session where the price of treasuries at the very front-end of the maturity spectrum rose. At auction, demand for 4-week bills increased to the most since July (as reflected in the bid/cover ratio) as yields declined from 1.62 to 1.50 percent. That was the lowest return since the beginning of 2018 as investors prioritized preserving capital ahead of near-term noise.

After all, the December 15 deadline for President Donald Trump to decide on further tariffs against China is nearing. He noted that “we will have to see” and that talks are “moving along well”. Today’s bond auction seems to have reflected some skepticism from investors. Hours after Trump’s comments, reports from the Dow Jones crossed the wires that the two countries remain at odds over the value of agricultural purchases.

Friday’s Asia Pacific trading session is a light economic docket, placing the focus for foreign exchange markets on risk trends. S&P 500 futures are little changed, pointing to a mixed start into the end of the week. Traders may be hesitant to commit to directional bias ahead of key data from North America. Later in the day, US and Canadian employment figures will cross the wires.

My majors-based US Dollar index accelerated its descent after breaching a rising trend line – as expected. That has brought the Greenback closer to revisiting key rising support from September 2018. The key psychological barrier just under it also includes lows from Junes at 1.2792. If prices fail to breach these boundaries, the USD could be due for a bounce ahead. 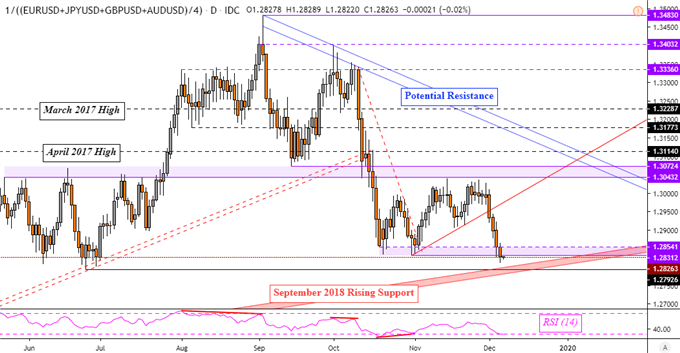