The New Zealand Dollar is gaining early into Thursday’s trading session after the RBNZ released its review on capital buffer requirements. The central bank outlined the course for small and large lending institutions to raise capital buffers over the course of 7 years. As a result, the RBNZ estimates that the changes could amount to borrowing costs rising by 20.5 basis points after they are incorporated into the economy.

This helped extend the rally in NZD/USD from Wednesday’s trading session as the sentiment-linked currency followed Wall Street higher. Markets remain fixated on back and forth in US-China trade war news. On Tuesday, stocks gapped lower on the possibility that an interim agreement between the world superpowers could be delayed until after the 2020 US Presidential Election. 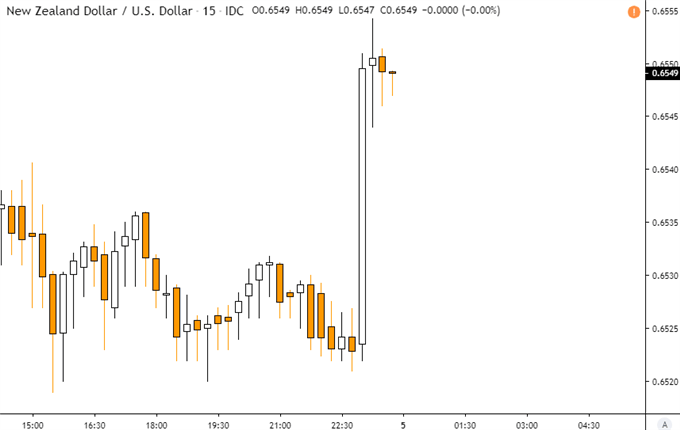 Over the past 24 hours, US President Donald Trump rekindled risk appetite as he said that negotiations are going “very well”. The US and China are seemingly coming to terms on an amount of tariffs that could be rolled back. This is a key issue that latter has made as a sticking point in talks. As trade tensions between Washington and with Europe and South America simmer, the S&P 500 closed about 0.63 percent higher.

Asia Pacific markets may follow Wall Street higher, catching up on the latest optimism from investors about a US-China trade deal. That may further propel buying pressure in the sentiment-linked New Zealand Dollar and Australian Dollar. The anti-risk Japanese could weaken as USD/JPY rises. Although the ongoing back and forth in trade updates makes for unpredictable conditions ahead of the December 15 tariff deadline.

NZD/USD continues its upside reversal in the aftermath of a breakout above an Ascending Triangle. This is typically a bullish chart pattern that could pave the way for a revisit to levels last seen in June and July. Near-term resistance is ahead at 0.6592. Otherwise, a turn lower paves the way for a retest of former resistance which could stand in the way as support at 0.6424 – 0.6465.

Chart of the Day – NZD/USD 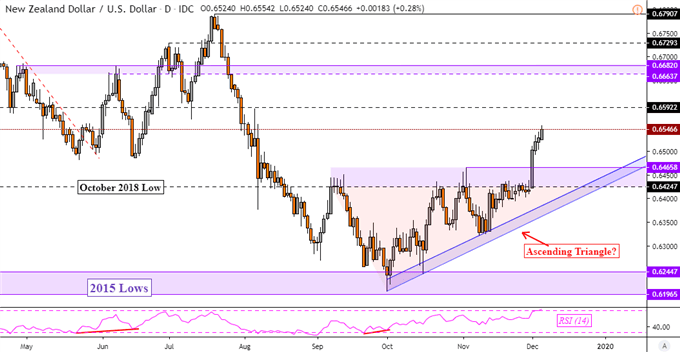