The anti-risk Japanese Yen and Swiss Franc were on the defensive Tuesday as the primary focus for markets continued being speculation of a US-China trade deal. Overnight, reports crossed the wires that both nations had a conversation over a phone call, agreeing to continue “phase one” talks. During the Wall Street session, US President Donald Trump added that a deal is in the “final thrones” and that “it’s going very well”.

This helped push the S&P 500 (+0.22%) and Dow Jones (+0.20%) to record highs, though at a slower pace than Monday’s session. It remains to be seen if the two countries could sign an agreement by the December 15 tariff deadline. Markets welcomed weekend news that China would take steps to penalize intellectual property rights violations. The country also wants to see the US begin rolling back already-imposed levies.

The focus on trade deal resolution meant that for now, a fourth consecutive drawdown in US consumer confidence was brushed aside. The US Dollar traded mixed, outperforming against the Yen and British Pound. Sterling remains glued to updates on UK General Election polling. The Conservative Party’s lead over Labour cautiously narrowed. A majority for the former is key to pass PM Boris Johnson’s Brexit deal.

Heading into Wednesday’s Asia Pacific trading session, some of the optimism from Wall Street’s session could be mute. Late in the day, Trump noted that he is holding up a deal with China as it has to be good. He stressed that he wants a deal where the US does “much better” in order to “catch up”. This could keep the anti-risk Yen neutral.

On a daily chart, the USD/JPY trend remains intact, guided higher by rising support from the end of August – redlines on the chart below. Prices have started seeing upside momentum being revived, but will this be enough to clear through resistance? USD/JPY needs to take out the key range between 109.31 and 109.49 to resume the dominant uptrend. That would pave the way for a revisit of May highs.

This is in-line with bullish signals pointed out by IG Client Sentiment. Traders are further net-short than yesterday and last week, and the combination of current sentiment and recent changes gives us a stronger USD/JPY-bullish contrarian trading bias. Join me later today at 1:00 GMT as I uncover what else trader positioning is having to say about the outlook for financial markets! 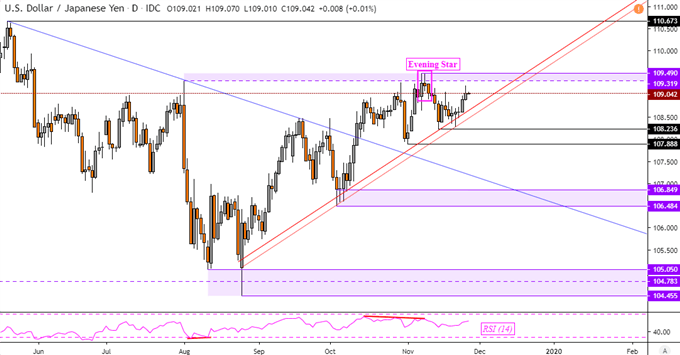