Canadian Dollar Gains, Euro Weakens against the US Dollar

The Canadian Dollar was one of the best performing majors on Thursday, sending USD/CAD lower despite some strength in the US Dollar. Bank of Canada’s Governor Stephen Poloz spoke and noted that the central bank thinks that monetary conditions are “about right”. This helped cool January rate cut expectations, which prior to his speech, were hovering around 54 percent probability. They have cooled to about 43% odds.

The worst-performing majors were the sentiment-linked Australian and New Zealand Dollars. AUD/USD and NZD/USD fell alongside the S&P 500 during Wall Street trade. Tensions remained elevated about a near-term US-China trade deal. Some of the pessimism from investors can be traced to the recent passage of the Hong Kong Bill in the US House. A sign-off from President Donald Trump could further dim trade deal prospects.

Across the Atlantic Ocean, the Euro also weakened against the Greenback. Over the past 24 hours, Trump announced that he will decide “fairly soon” about his decision on European auto tariffs. The deadline for this decision, which traces its beginnings to a national security probe, has passed since last week. Simultaneously, reports also crossed the wires on Thursday that the White House is weighing a new European trade probe.

S&P 500 futures are aiming cautiously to the downside heading into Friday’s Asia Pacific trading session. The regional economic event docket is fairly light. This places the focus for foreign exchange markets on risk trends. As such, we may see the AUD and NZD extend their decline. The anti-risk Japanese Yen could stand to appreciate in this scenario.

With Thursday’s close, USD/CAD has left behind a Bearish Harami candlestick pattern. With downside confirmation, this could spell the end to the near-term uptrend that has its beginnings from late October. This places the focus on near-term support which is a psychological barrier between 1.3206 to 1.3226. Prices have also curiously topped under the former rising support line from July – see red-dashed line below. 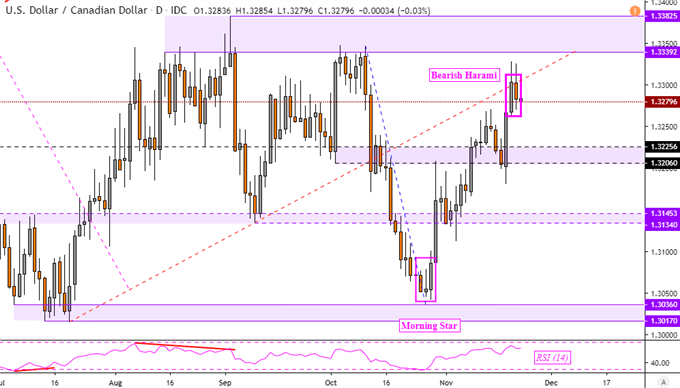