The anti-risk Japanese Yen is gaining while the sentiment-linked Australian and New Zealand Dollars are weakening early into Thursday trade amid a deterioration in market mood. Their performance can be traced back to the US trading session where the S&P 500 and Dow Jones Industrial Average dropped 0.38 and 0.40 percent respectively. This dynamic may pick up pace during the Asia Pacific trading session.

On Wednesday reports crossed the wires from Reuters that a “phase one” US-China trade deal could not be completed by the end of this year. Local front-end government bond yields tumbled as 2020 Fed rate cut bets rose, reflecting rising concerns about the outlook for the US economy. There was a temporary recovery in stocks as a Trump aide said progress was being made on China, but that boost was soon faded.

As the markets transitioned into Thursday, Trump downplayed China’s efforts to step up in negotiations, further casting doubt over the possibility of a near-term deal. This is as the US House passed the Hong Kong Bill and sent it to the White House for the President’s anticipated sign-off. China made its displeasure on this bill well known and a countermeasure may be raising tariffs against the US which the WTO has approved.

The US Dollar weakened cautiously as markets focused on more-dovish Fed prospects. Due to the sporadic updates in US-China trade talks, FOMC minutes from the October meeting passed without much noise. The report reiterated that most policymakers saw rates “as appropriate” after the latest cut, adding that rates are “well calibrated” after last month’s adjustment.

S&P 500 futures are pointing noticeably lower heading into APAC trade, opening the door to extending the risk aversion seen from the Wall Street session. That may continue propelling the Japanese Yen higher while weakening the sentiment-linked AUD and NZD. The latter will be eyeing New Zealand credit card spending, a softer-than-expected outcome may fuel RBNZ rate cut bets after this month’s surprise hold.

Weakness in AUD/USD may see the currency pair pressure near-term support which is a range between 0.6770 and 0.6784. This followed a break under a near-term rising support channel from October, overturning the uptrend. A daily close under 0.6770 opens the door to revisiting the lows achieved in August through October. 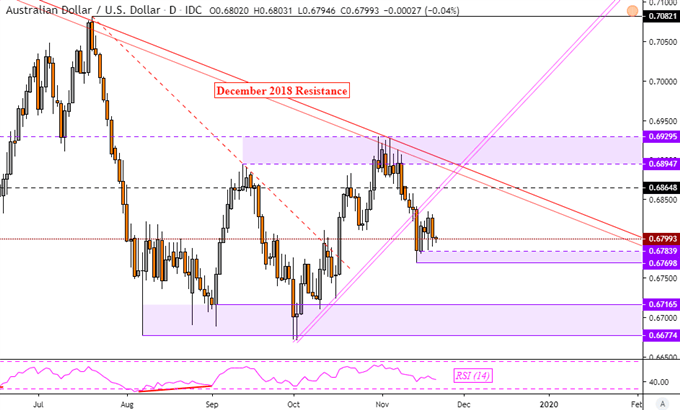