The British Pound was one of the best-performing major currencies on Monday as opinion polling showed the UK Conservative Party widening their lead against the opposition Labour Party. Should the former receive a majority at next month’s general election, that is seen as strengthening Prime Minister Boris Johnson’s push for his Brexit deal.

Closely behind the GBP was the anti-risk Japanese Yen which traced a wild day on Wall Street. Prior to market open, S&P 500 futures dipped as reports crossed the wires that China was feeling pessimistic about a trade deal. Their key concern is hesitation from US President Donald Trump to roll back currently enacted tariffs. The sentiment-linked Australian and New Zealand Dollars weakened.

The US Dollar also weakened as falling front-end government bond yields signaled rising expectations of Fed easing bets in 2020. However, the Greenback and bond yields trimmed some of their losses after the US granted a narrow 90-day relief extension for Huawei. This allows local companies, in remote areas, to continue doing business with the Chinese telecommunications giant.

S&P 500 futures are pointing cautiously lower heading into Tuesday’s Asia Pacific trading session. This could spell out a bittersweet mood in the coming hours amid US-China trade deal uncertainty. That may continue supporting the Japanese Yen. Conversely, the Australian Dollar may tick lower as it also awaits upcoming minutes from the November RBA interest rate announcement.

With Monday’s conclusion, GBP/USD sits right under the key resistance range between 1.2950 to 1.3013. This followed a bounce after hitting support (1.2773 – 1.2798). In fact, the Pound has been consolidating within a channel since pausing the dominant uptrend from September. Bullish signals via IG Client Sentiment do hint that the pair may keep pushing deeper into resistance. A close above exposes May highs.

Join me on Wednesdays 1:00 GMT as I cover what the prevailing trends in market positioning are revealing about the outlook for the major currencies! 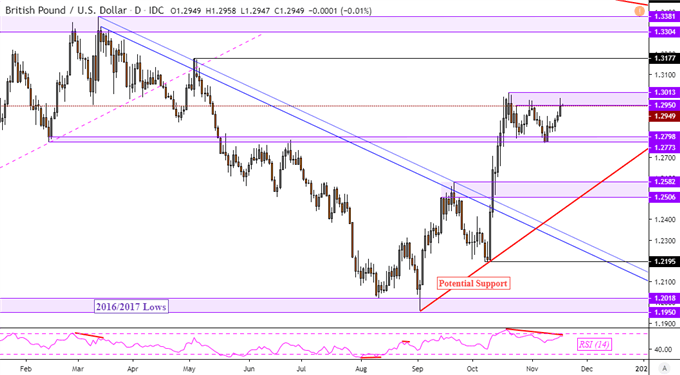