The anti-risk Japanese Yen and similarly-behaving Swiss Franc were the worst-performing major currencies on Friday. On the flip side of the spectrum, the sentiment-linked Australian and New Zealand Dollars soared as the S&P 500 and Dow Jones Industrial achieved a record high. The cheery mood from investors undermined the need for havens as the highly-liquid US Dollar declined.

Optimism could be traced to rising bets of a US-China trade deal, fueled by White House Economic Adviser Larry Kudlow. He mentioned that the two countries are down to “short strokes” on a phase one deal. His comments crossed the wires during the Asia Pacific trading session. Wall Street gapped higher Friday and then gained some despite a lack of further details into talks, hinting that investors were doubling down.

As such, mixed US retail sales and disappointing local industrial production passed without much notice. The latter showed output contracting 0.8% m/m in October, the worst decline in over 10 years and following similar disappointing losses in manufacturing jobs last month. The rise in risk appetite helped fuel a rally in sentiment-linked crude oil prices, showing WTI closing at its highest since September.

Absent a sudden u-turn in US-China trade talk bets, we may see Asia Pacific equities follow Wall Street higher as the new week begins. A lack of major economic news flow places the focus for foreign exchange markets on risk trends. As such, we may see the anti-risk Japanese Yen continue its decline as the AUD and NZD aim higher. The US Dollar is also vulnerable as demand continues ebbing for haven-linked assets.

Gains in AUD/USD on Friday left behind near-term support at 0.6770 after closing above 0.6809. Further upside confirmation may pave the way for a retest of former rising support from October – pink lines below. That may reinstate itself as resistance. Otherwise, further upside pushes eventually exposes falling resistance from December 2018. 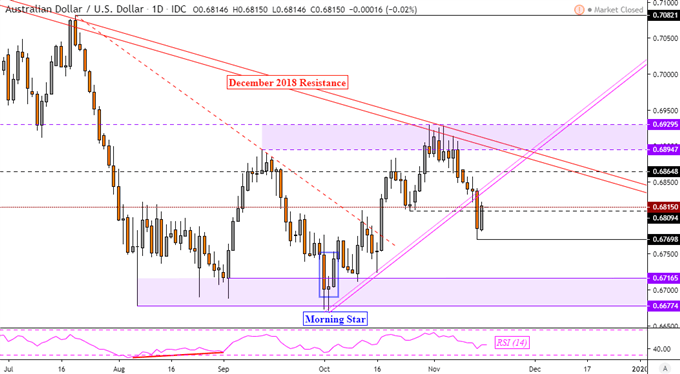