The anti-risk Japanese Yen aimed higher against its major counterparts while the sentiment-linked Australian and New Zealand Dollars declined. This reflected a cautiously pessimistic tone in financial markets on Thursday as investors still await clarification into a US-China trade deal. During the Wall Street session, the Financial Times reported that the two countries are struggling to close a phase one deal.

Still, the S&P 500 ended the day little changed. Fed Chair Jerome Powell continued his testimony to Congress, reiterating much of yesterday’s language. The key takeaway is that despite a relatively favorable outlook on the economy, the central bank sees current policy as appropriate. As such, it may be some time until markets have to worry about the resumption of tightening credit conditions.

Early into Friday’s session, White House Economic Adviser Larry Kudlow commented that the “mood music is pretty good on China trade”. He also noted that there is “no agreement yet on a phase one” and that Trump is “not ready to make commitments”. The Yen nudged tepidly lower as S&P 500 futures rose, perhaps hinting to a rosy Asia Pacific session to come.

However, follow-through seems unlikely until the road ahead for trade negotiations sees substantial progress. The same rosy language about progress in talks appears to be losing its propensity to elicit market volatility. There are doubts about a deal as China wants to see an unwinding of US tariffs against it which President Donald Trump has shown reluctance to commit.

Meanwhile, implied volatility in the Euro is on the rise as markets await Trump’s decision on whether or not to impose auto tariffs against the European Union. The deadline is Thursday. Meanwhile, the Canadian Dollar could fall if BoC Governor Stephen Poloz reiterates pessimistic commentary on the local economic outlook. He is going to be hosting a speech later today around 2:15 GMT at the San Francisco Fed Conference.

USD/JPY is looking increasingly vulnerable to a topping after prices closed under the Rising Wedge. This is a bearish chart pattern that could imply a reversal of the dominant uptrend since late August. Meanwhile, this is as trader positioning is offering a bearish outlook on the currency pair. A daily close under 107.89 could pave the way for a new downtrend.

Join me on Wednesdays 1:00 GMT as I cover what the prevailing trends in market positioning are revealing about the outlook for the major currencies! 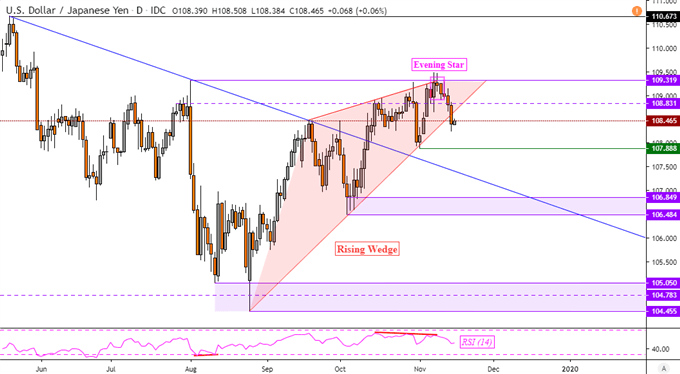