The British Pound outperformed against its major counterparts on Monday. Sterling relished that Nigel Farage – leader of the Brexit Party – announced his group would not be contesting seats that the Conservative Party had won in the 2017 election. In short, this has boosted odds that UK Prime Minister Boris Johnson can secure a majority at upcoming general elections and thus pass his Brexit deal.

The New Zealand Dollar also enjoyed a relatively rosy session despite softer-than-expected local data overnight. Retail credit card spending declined 0.6% m/m in October against expectations of a 0.4% rise. That was the worst contraction this year. NZD/USD rose alongside New Zealand front-end government bond yields, perhaps reflecting bets that Wednesday’s RBNZ rate cut could be the end of its easing cycle.

Meanwhile the sentiment-linked Australian Dollar underperformed as it tracked a cautious “risk-off” tilt in financial markets. This followed weekend remarks from US President Donald Trump who continued jawboning US-China trade deal bets. He stated that reports on the level of tariffs potentially being lifted – which could amount to $112b – are “incorrect”.

The S&P 500, while trimming some losses after a downside gap, closed 0.20 percent lower with futures now pointing downwardly. With that in mind, this could translate into a deterioration in risk appetite during Tuesday’s Asia Pacific trading session. That may boost the anti-risk Japanese Yen and weighing against the sentiment-linked Australian Dollar.

GBP/USD has bounced on the key psychological range between 1.2773 to 1.2798. This could pave the way for more consolidation as prices aim to retest the October highs. That makes for a range of resistance between 1.2950 to 1.3013. A daily close above 1.2866 - the April low – could pave the way for near-term gains. Otherwise, a daily close under support risks overturning the uptrend from the beginning of September. 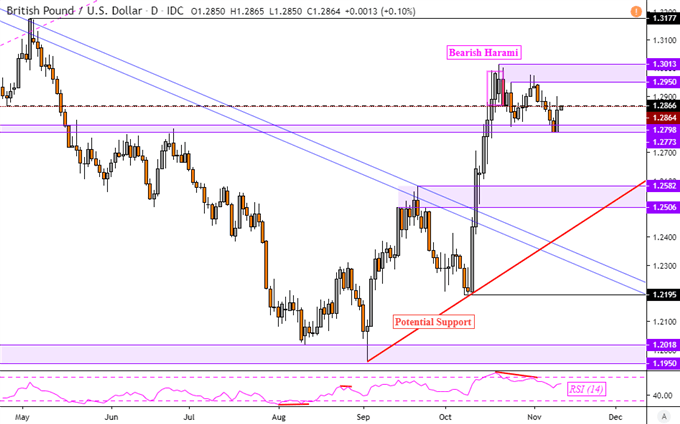