The British Pound was one of the worst-performing major currencies on Thursday. Its decline could be traced to unexpectedly dovish developments from the Bank of England monetary policy announcement. It was revealed that two voters dissented against a rate hold at 0.75 percent. Governor Mark Carney also highlighted that risks to local growth are skewed to the downside.

At this point, Brexit news arguably remains the key fundamental driver for Pound price action as the UK awaits an upcoming general election. The BoE noted that should Brexit and global risks worsen, policy easing could be needed. For the time being, the latter seems to be tilting towards a favorable position given further developments over the past 24 hours.

S&P 500 futures are pointing higher heading into Friday’s Asia Pacific trading session. Arguably some of the upside potential that may come has been reduced. This is because a report from Reuters revealed that plans from the White House to rollback Chinese tariffs could be faced with internal opposition. A deterioration in risk trends could thus bode ill for the Australian Dollar as the Yen rises.

The former will be eyeing unscheduled Chinese trade data for October. China is Australia’s largest trading partner. Data is still tending to underperform relative to economists’ expectations out of the world’s second-largest economy. More of the same may add fuel to near-term RBA easing expectations. The central bank will also be releasing their statement on monetary policy at 00:30 GMT, outlining assessments of local conditions.

GBP/USD now sits at a potential turning point, hovering above the key psychological barrier between 1.2773 – 1.2798. The fall to support was preceded by a combination of a Bearish Harami candlestick formation alongside negative RSI divergence. The latter is a signal of fading upside momentum. A daily close under support could pave the way for a test of a potential rising trend line from September – red line below. 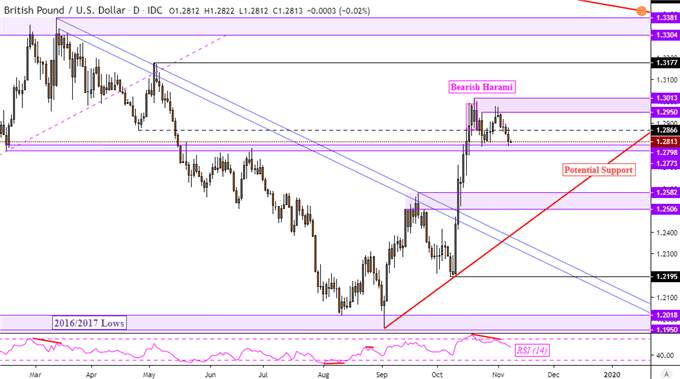