The Canadian Dollar underperformed against its major counterparts on Wednesday, tracking local front-end government bond yields lower. Markets are increasing expectations that the Bank of Canada could deliver a rate cut in early 2020. Odds of a 25bp reduction in January are now hovering around 48 percent probability. This may also have been pre-positioning for Friday’s Canadian jobs report.

Compounding CAD weakness later in the day was a combination of lower crude oil prices and fading bets of a US-China trade deal. Crude sank after weekly EIA inventory report printed an unexpected 7.9m b/d uptick against estimates of a 2.0m rise. Meanwhile, a possible delay to a trade agreement signing between the world’s largest economies deteriorated market mood.

The anti-risk Japanese Yen cautiously rose against its major counterparts as the sentiment-linked Australian and New Zealand Dollars weakened during the Wall Street trading session. The British Pound depreciated as well following a poll showing the UK Conservative Party losing their lead against the opposition Labour Party. Threats to the outcome of a general election for the former risks derailing Johnson’s Brexit deal.

S&P 500 futures are pointing cautiously lower heading into Thursday’s Asia Pacific trading session. This could speak to a pessimistic mood to come ahead which may bode well for the Japanese Yen. That could come at the expense of the AUD and NZD. The former will be closely eyeing Australian trade data to see how that may shift near-term RBA rate cut bets.

USD/CAD closed at its highest in about 3 weeks, extending its near-term uptrend as expected. This followed a Morning Star bullish reversal pattern that formed late last month. The currency pair failed to break through near-term support (1.3134 – 1.3145) and has launched higher. The Canadian Dollar now eyes the next psychological barrier which is a range between 1.3206 to 1.3226. 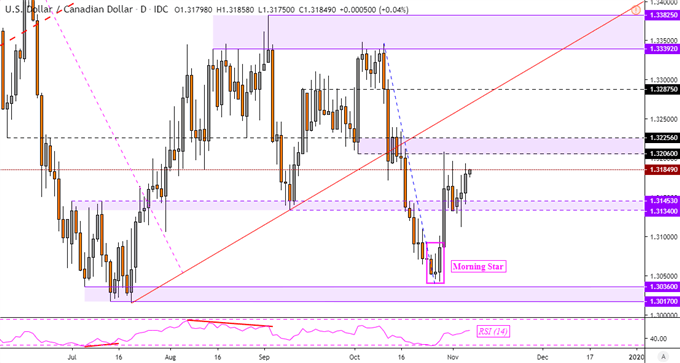