The anti-risk Japanese Yen and similarly-behaving Swiss Franc weakened against their major counterparts on Tuesday. This is despite a deterioration in sentiment at the onset of the Wall Street trading session. The S&P 500 received an upside gap, building on uplifting updates in US-China trade talks from the Asia Pacific trading session. The latter took its toll on the JPY and CHF as they trimmed losses later in the day.

Wall Street was quick to pare its upside gap and soon found fundamental headwinds. As a consequence of rising US-China trade deal bets, 2020 Fed rate cut bets have been on the decline. Markets are now only pricing in about a 39% chance of a 25bp cut in March, down from 62% probability last Thursday. Then, rosy US economic data further pushed local front-end government bond yields higher.

The US Dollar received a boost after local ISM non-manufacturing PMI crossed the wires. The 54.7 outcome beat the 53.5 estimate and continues to show the stark contrast between fading industrial output and a supportive consumption sector. The latter makes for about 2/3 of the world’s largest economy. As an anti-fiat asset, gold prices (-1.74%) experienced the worst performance in a day in just about 6 weeks.

Join me at 1:00 GMT as I uncover what trader positioning is revealing about the outlook in financial markets!

The New Zealand Dollar is cautiously lower heading into Wednesday’s APAC session following a cautiously pessimistic local jobs report. Aside from that, the regional docket is rather light. This places the focus for currencies on the mood in financial markets. As such, we may see regional bourses echo the lackluster performance on Wall Street. That may extend Yen gains from the US session as AUD falls.

As anticipated in this week’s technical forecast, fading downside momentum has fueled a rise in the US Dollar thus far. Against an average of the Euro, Pound, Yen and Australian Dollar, USD has extended its push above near-term falling resistance from October. A daily close above 1.2993 may truly open the door to a lasting reversal of its dominant downtrend. 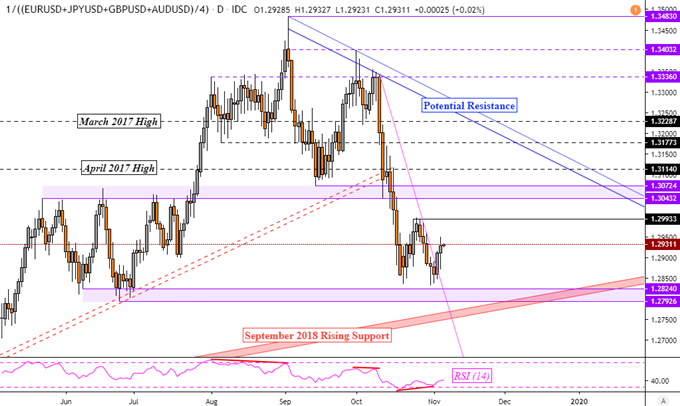