The anti-risk Japanese Yen fell against its major counterparts on Friday as a pickup in market mood undermined the need for capital safety. It began during the Asia Pacific trading session with a 20-month high in Caixin PMI data, cooling woes about the health and vigor of the world’s second-largest economy amid an ongoing trade war. The sentiment-linked Australian and New Zealand Dollars gained.

Then, stocks received a further boost as better-than-expected US NFPs crossed the wires. While this helped diminish near-term Fed rate cut bets, the US Dollar eventually gave up gains on the jobs report as stocks rallied. The S&P 500 closed 0.97 percent to the upside, hitting another record high as the MSCI Emerging Markets Index hit its best price since July.

US-China trade deal bets were also afoot as Beijing announced that it reached a consensus in principle with the United States. This followed a “constructive” phone call between Trade Representative Robert Lighthizer and Vice Premier Liu He. However, risk appetite somewhat cooled towards the end of Friday’s session as White House Economic Adviser Larry Kudlow said that tariff hikes could “still be on the table”.

With that in mind, the focus for foreign exchange markets will likely be on risk trends at the onset of the new week. Regional bourses may follow Wall Street higher, paving the way for further gains in the Australian Dollar. AUD/USD will also be closely watching local retail sales data for Q3. The anti-risk Japanese Yen may extend losses.

The AUD/USD sits just under key descending resistance from December 2018 after clearing the September high. A daily close above 0.6930 with upside confirmation may open the door to a reversal of the dominant downtrend. Otherwise, a turn lower places the focus on a rising support channel from the beginning of October.

Chart of the Day – AUD/USD Daily 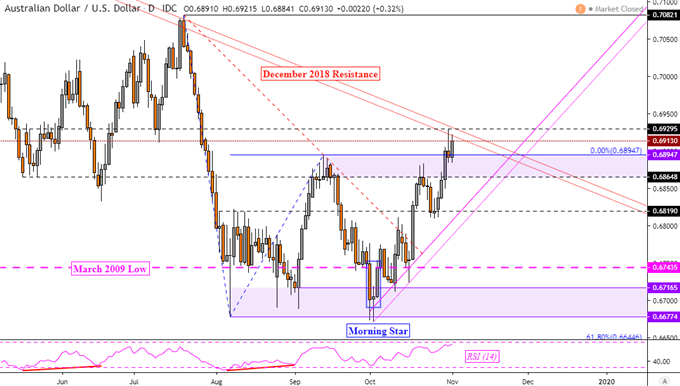