The anti-risk Japanese Yen outperformed as the sentiment-linked Australian Dollar tumbled on Thursday amid a distinct deterioration in market mood. During the European session, China was said to have doubted the possibility of long-term trade deal with the United States, unwilling to budge on key large structural changes. This undermines the recently agreed “phase one” deal the two sides reached earlier this month.

During the US session, risk appetite further deteriorated on disappointing economic data. The Chicago Business Activity PMI report clocked in at 43.2 in October versus 48.0 expected and 47.1 in August. For PMI surveys, readings under 50 indicate increasingly contracting economic conditions. In today’s case, this was the softest outcome since 2015 despite hopes of a US-China trade deal rising this month.

The haven-linked US Dollar was little changed on opposing fundamental forces; rising Fed rate cut bets versus the demand for safe and liquid assets. The latter sent the S&P 500 lower as it struggled to sustain recently achieved record highs. Risk aversion spread offshores as well, with the MSCI Emerging Markets Index showing increasing signs of a top.

USD/JPY tumbled the most in over two months following a Spinning Top that emerged earlier this week – as expected. This has brought the currency pair to the floor of a Rising Wedge formation, which is typically a bearish reversal formation. A breakout to the downside risks overturning the dominant JPY uptrend that has prevailed since the end of August.

Chart of the Day – USD/JPY Daily 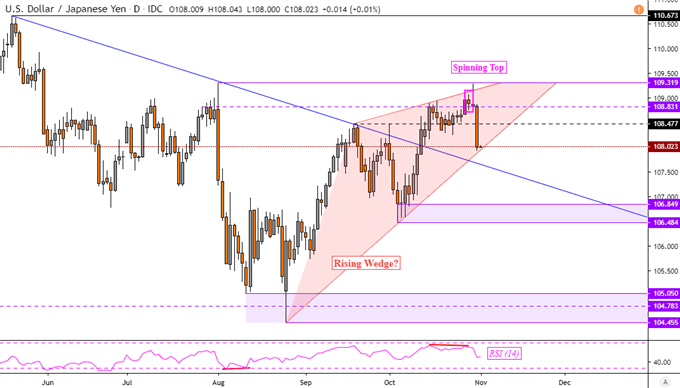