The Canadian Dollar fared even worse than US Dollar on Wednesday. Before the Fed, the Bank of Canada had its monetary policy announcement. While the central bank held rates unchanged, there was a material cautious shift in their language as the economic outlook was downgraded. Odds of a 25bp rate cut by year-end suddenly climbed from 0 percent probability to over 25%. USD/CAD soared, as expected.

The haven-linked US Dollar on the other hand was jawboned, eventually finding a path lower as Fed Chair Jerome Powell boosted risk appetite. This followed the third rate cut from the central bank which initially spooked markets as some dovish language was cut out. However, during Powell’s press conference, local front-end government bond yields tumbled as the S&P 500 closed at another record high.

The markets appeared to have been reassured by Mr Powell’s comments on the current stance of policy, which “is likely” to remain appropriate. He added that they do not envision seeing inflation picking up for the time being. Odds of a further 25bp reduction this year are now unlikely. The markets are however pricing in a 50% chance of one by March 2020. Compared to Tuesday, this represents a more dovish shift.

With the Fed behind us, S&P 500 futures are pointing higher heading into Thursday’s Asia Pacific trading session. This may translate into a rosy session in regional markets, offering a boost to the sentiment-linked Australian Dollar. Though gains may be capped if the next round of China Manufacturing PMI data disappoints. The anti-risk Japanese Yen could weaken, looking past a potentially static BoJ rate decision.

On a daily chart, AUD/USD soared through key resistance as it closed above 0.6895. This has left the Aussie facing a well-defined descending channel of resistance that has its inception from December 2018. As such, overturning the dominant downtrend still has more progress to be made. Should prices turn lower, former resistance may establish itself has support at 0.6865, the lower boundary of a psychological range.

Chart of the Day – AUD/USD Daily 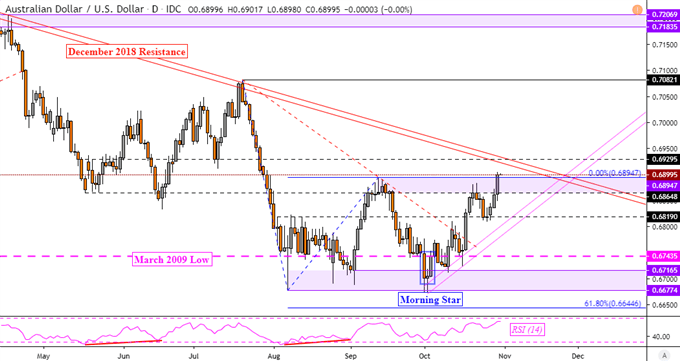