The Canadian Dollar was the worst-performing major on Tuesday, even failing to capitalize on a rise in crude oil prices during the US session. A clear catalyst seemed absent, but it might have been speculation that the Bank of Canada could deliver dovish forward guidance at its anticipated interest rate hold tomorrow. The Loonie holds the title as of one of the highest-yielding liquid currencies.

As such, the currency is particularly vulnerable to data that risks taking away its high-rate advantage. That might have stemmed from the United States, Canada’s top trading partner. In the US, housing prices in 20 cities on average declined about -0.2% m/m versus -0.1% expected. Meanwhile, local consumer confidence dipped to its lowest since June. The US Dollar also saw some weakness as dismal data spooked investors.

Check out the DailyFX Economic Calendar for updates on key even risk for the major currencies!

Meanwhile, risk trends were jawboned by the latest US-China trade war developments. A report from Reuters crossed the wires citing a US administration official that a “phase one” deal with China may not be signed at next month’s APEC meeting in Chile. Both the S&P 500 and MSCI Emerging Markets Index ended lower from yesterday, dropping potential technical signals of a top.

The next 24 hours are filled with plenty of event risk for currencies beginning with Wednesday’s Asia pacific trading session. The Australian Dollar will be eyeing third quarter local CPI data which risks disappointing relative to expectations, fueling RBA rate cut bets. Then at an unspecified time, the Bank of Japan will hold its October monetary policy announcement as the Yen awaits updated economic outlook prospects.

As for risk trends, Asia Pacific markets may see market mood sour following the Wall Street trading session. This may boost the anti-risk Japanese Yen while weakening the sentiment-linked New Zealand Dollar. Though meaningful follow-through will likely have to wait until the Fed rate decision crosses the wires at 18:00 GMT. Afterwards, Chair Jerome Powell will speak at 18:30 GMT.

With the weakness in the Canadian Dollar, USD/CAD has left behind a Morning Star bullish reversal pattern on the daily chart. Upside confirmation opens the door to overturning the dominant downtrend that has prevailed since earlier this month. Though positioning signals offer a bearish-contrarian USD/CAD forecast. As such, it may be best to stand aside for the time being to let the fundamentals clarify the CAD outlook.

Join me later today at 1:00 GMT as I discuss what trader positioning is saying about the outlook for the US Dollar ahead of the FOMC!

Chart of the Day – USD/CAD Daily 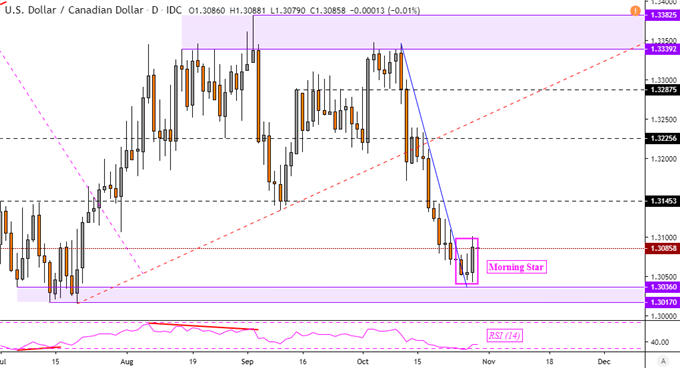