On Thursday, you could find the sentiment-linked New Zealand and Australian Dollars leading the way as some of the worst-performing major currencies. In stark contrast, the anti-risk Japanese Yen and haven-linked US Dollar aimed cautiously higher. This is despite gains in European and US equities, but those in the latter category trimmed some of their upside progress as risk appetite cooled on Wall Street.

While the S&P 500 gapped higher at open, it quickly aimed lower as ECB President Mario Draghi made his last press conference in the aftermath of the October monetary policy announcement. Mr Draghi offered a warning alluding to lower rates for some time amid “weaker growth momentum”. Bank shares were some of the worst-performing categories in both European and US markets. The Euro weakened.

During the Wall Street session, US Vice President Mike Pence fueled tension concerns over China amid the ongoing trade war. Mr Pence offered hawkish commentary regarding China’s actions in Hong Kong. A looming threat that could lead to escalation between the two countries is the HK Bill, passed in the House last week. It could result in economic sanctions, perhaps derailing trade talk progress.

With that in mind, this leaves the pro-risk Australian Dollar and New Zealand Dollar could be left vulnerable in APAC trade. This would bode well for the Japanese Yen and extend into the US Dollar. Keep a close eye for updates out of China regarding Mike Pence’s speech. Signs of growing regret from the world’s second-largest economy may further dent risk appetite.

On a daily chart, NZD/USD has left behind a Bearish Engulfing candlestick pattern. A clear sign of indecision, downside follow-through could translate into a reversal of the near-term uptrend from the beginning of this month. That may pave the way for a test of what could be a potential rising support channel – blue area below. Otherwise, a daily close above 0.6425 would invalidate this formation setup.

Chart of the Day – NZD/USD 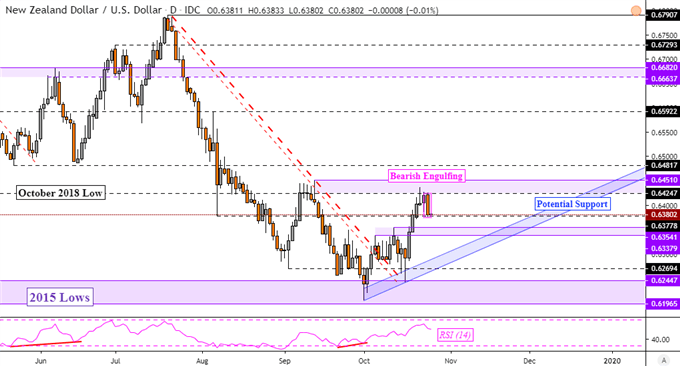