The British Pound may gap lower at the start of this week’s trading session. Over the weekend, the UK Parliament voted to delay a definitive vote on Prime Minister Boris Johnson’s Brexit deal. This past week Sterling has been picking up gains on hopes that his revised agreement, which builds on the foundations negotiated by former PM Theresa May, could pass in the House of Commons.

Since a vote on his deal has been put on hold, Mr Johnson is required by law to seek a delay in Brexit as outlined in the Benn Act. This would push the deadline for the divorce back by four months if the European Union consents. More to the point, for the British Pound this will likely result in near-term selling pressure as investors have to adjust their positioning to reflect updated fundamentals, unwinding recent exposure.

Check out my British Pound technical forecast to see where prices could go this week for GBP/USD, EUR/GBP and GBP/JPY

Sentiment soured on Wall Street at the end of last week, particularly as reports crossed the wires that the FAA accused Boeing – a major US aircraft maker - of withholding information on the 737-Max jet amid an ongoing investigation. Boeing shares plummeted, ending the day about 6.8 percent to the downside. The Dow Jones Industrial closed 0.95% lower as the S&P 500 fell 0.39%.

In the near-term, the focus for currencies will likely be the aftermath of this weekend’s vote in the UK Parliament. In addition to the broad weakness seen in shares on Wall Street from Friday, Asia Pacific equities may have further reason to fall given what may be a delay in the EU-UK divorce. As such, the anti-risk Japanese Yen may climb at the expense of the pro-risk Australian Dollar. The USD may also find a boost.

On a daily chart, AUD/USD continues its near-term gains in the aftermath of a Morning Star bullish reversal pattern. Prices are sitting under the next critical psychological barrier which is a range between 0.6865 and 0.6895. A turn lower places the focus on near-term support at 0.6819 before retesting 0.6744. Otherwise, extending gains would eventually pave the way for a test of descending resistance from December 2018. 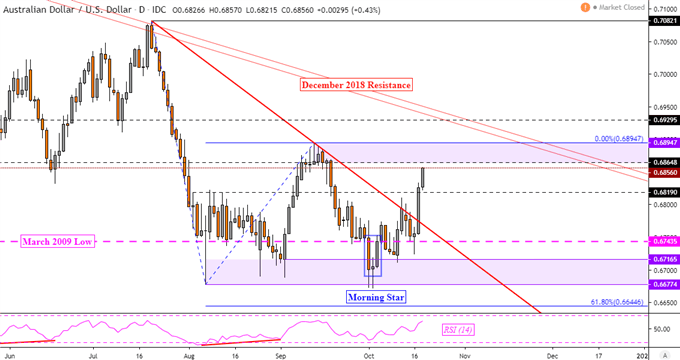