The anti-risk Japanese Yen aimed higher against most of its major counterparts on Monday after optimism in US-China trade talks cooled – as expected. Over the past 24 hours, China said that it wants more negotiations before signing President Donald Trump’s “phase one” of the deal reached at the end of last week. S&P 500 futures declined throughout most of the day, and so too did the pro-risk Australian Dollar.

Want to learn more about where the Japanese Yen may go? Check out our USD/JPY Q4 forecast!

Sentiment did see a slight boost during the US trading session as Treasury Secretary Steven Mnuchin reiterated that progress was made in negotiations last week with China. He added that the two countries will be working closely to sign a deal perhaps at next month’s APEC meeting in Chile. Still, an unwinding in risk appetite proved to bode well for the haven-linked US Dollar as it climbed throughout most of the day.

Meanwhile, the British Pound hit an obstacle after spending the last two days of last week rallying aggressively higher on Brexit deal hopes. Over the weekend, less optimistic views from the EU crossed the wires and erased some of GBP’s gains. Though later in Monday’s session, a report from the Daily Telegraph offered insight into a possible solution to the Irish Backstop as sources reported a “cautiously optimistic” tone on a deal. GBP/USD cautiously rose.

Check out our special report outlining the importance of the Irish Backstop to Brexit talks!

From a sentiment standpoint, we may see Asia Pacific equities aim cautiously lower and follow the bittersweet performance on Wall Street. That may continue supporting the Japanese Yen. As for the Aussie, it may weaken if upcoming RBA meeting minutes from the October announcement reiterate the need for “an extended period of low interest rates”. Then at 1:30 GMT, markets will be closely watching Chinese September CPI data.

Taking a close look at the AUD/USD daily chart, the pair is struggling to sustain its advance since bottoming in late September. The descending trend line is maintaining the dominant downtrend after a Morning Star bullish reversal pattern emerged earlier this month. If the former holds, we may see another retest of 2019 lows which offers a key psychological barrier between 0.6678 to 0.6717. 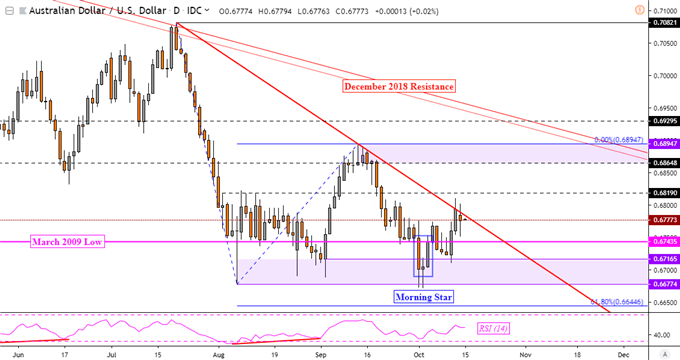