Risk aversion is kicking in at the onset of Thursday’s Asia Pacific trading session. The sentiment-linked Australian and New Zealand Dollars are falling alongside S&P 500 and Nikkei 225 futures. Meanwhile, the anti-risk Japanese Yen and similarly-behaving Swiss Franc are outperforming against their major counterparts. The souring in market mood can be traced to developments in US-China trade talks.

Reports crossed the wires from the South China Morning Post that the United States and China “made no progress” in deputy-level trade talks. In addition, China’s delegation team (currently in the US ahead of key negotiations at the end of this week) is now set to leave a day earlier than anticipated. This has increased fears that the world’s largest economies may start raising more tariffs against each other relatively soon.

Global growth has largely been weighed down by trade wars as highlighted by world institutions such as the International Monetary Fund (IMF) and the Organization for Economic Cooperation and Development (OECD). This is while US manufacturing activity has contracted by the most in over 10 years as China’s economy slowed to its weakest in over 30 years.

As such, further trade retaliation should trade talks collapse this week may continue weighing on general market mood. At the time of this writing, S&P 500 futures have wiped out the 0.91 percent gain from Wednesday’s trading session as the index looks to close under key rising support from the end of last year. With that in mind, the AUD, NZD are looking increasingly vulnerable as JPY could stand to keep gaining.

Losses in AUD/USD have overturned the Morning Star bullish reversal pattern highlighted earlier this week. Instead, the Aussie is now looking to retest the critical support range between 0.6678 and 0.6717. That is currently standing in-between it and extending the dominant downtrend that has been prevailing since January 2018. In the event of a turn higher, keep an eye on what could be potential falling resistance from July. 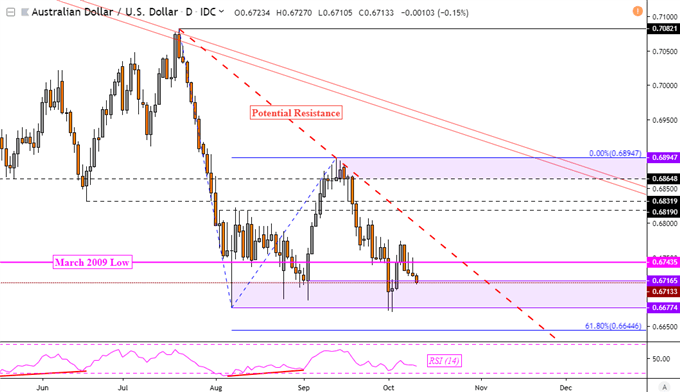