US Dollar Gains as Stocks Swing on Trade News

The highly-liquid US Dollar (and the world’s reserve currency) rose against most of its major counterparts on Monday as local stocks ended the session in the red amid the latest round of trade news. Reports from senior Chinese officials showed that the list of topics willing to be discussed had narrowed, though Beijing was ready to make a deal on parts both sides had agreed on.

While US President Donald Trump commented on Monday that a trade deal is a “good probability”, he made it clear that a partial deal is “not what we prefer at all”. These updates are critical as financial markets await the next round of discussions towards the end of this week. Adding to the complications later in the trading session were orders from the US to blacklist eight Chinese companies for human rights violations.

Risk appetite appears lackluster for the time being. The S&P 500, after being up as much as 0.7 percent earlier, closed 0.45% to the downside on Monday. With that in mind, that could begin Tuesday’s Asia Pacific trading session in a sour mood as Chinese financial markets reopen after the National Day holiday. This may weaken the pro-risk Australian Dollar as it also looks to local business conditions data. The anti-risk Yen may gain.

Taking a closer look at the DXY Dollar Index daily chart, the currency turned higher as it failed to breach near-term rising support going back to the middle of September – blue line below. This has placed the focus on immediate resistance which appears to be a psychological barrier between 99.08 and 99.37. On the other hand, a turn lower exposes the rising channel of support from June – red parallel lines below. 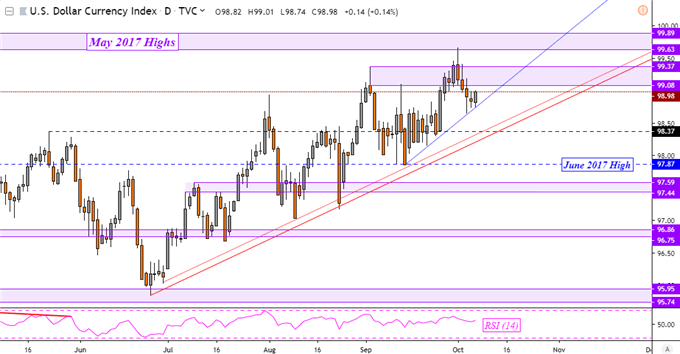