The anti-risk Japanese Yen rose on Tuesday after September’s US ISM Manufacturing PMI data triggered aggressive risk aversion. The 47.8 outcome (versus 50.0 expected and from 49.1 prior) was the softest in over 10 years, showing a second consecutive month of contraction. The survey of the US manufacturing sector revealed that the US-China trade war was a primary factor in fading activity.

The typical impact of dismal US economic data was on the menu for financial markets, especially with risk trends vulnerable in a state of slowing global growth. The S&P 500 dipped, ending the day 1.23 percent to the downside as demand for safer US Treasuries soared. Tumbling local bond yields, reflecting a dovish shift in Fed monetary policy expectations, weighed against the US Dollar.

The sentiment-linked Australian and New Zealand Dollars underperformed, though most of their losses occurred earlier in the session. This was especially true for the Australian Dollar which was battered in the aftermath of the RBA cutting benchmark interest rates for a third time this year. Meanwhile, anti-fiat gold prices outperformed as the precious metal recovered some of its recent losses.

It was also a volatile session for the British Pound, which was jawboned by Brexit-related headlines. On Tuesday, reports crossed that wires that the European Union was ready to consider a time limit on the Irish backstop – a key sticking point in ongoing negotiations ahead of the October 31 withdrawal deadline. UK Prime Minister Boris Johnson is expected to make a “final” offer on Brexit to the EU later today.

A light economic data offering during Wednesday’s Asia Pacific trading session places the focus for currencies on risk trends. As such, we may see the Nikkei 225 follow Wall Street lower as regional markets digest disappointing data from the United States. As such, we may see the anti-risk Japanese Yen accelerate its upside progress. This would come at the expense of the pro-risk AUD and NZD.

Resistance was recently reinforced in USD/JPY at 108.48, the September high. This price level is also just above the descending trend line from May – blue line on the chart below. A bearish outlook from IG Client Sentiment could pave the way for a retest of support which is the key range between 106.78 and 107.21. This would be in line with the dominant downtrend.

Join me on Wednesdays at 00:00 GMT as I discuss using IG Client Sentiment as a Third Form of Analysis in Financial Markets 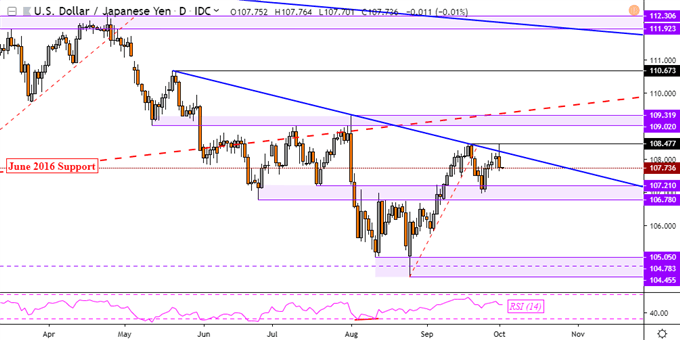