The British Pound underperformed against its major counterparts on Friday after the Bank of England fueled dovish monetary policy expectations. Policymaker Michael Saunders noted that even in the event the UK reaches a withdrawal deal with the EU, the country could still need interest rate cuts. He sees uncertainty around Brexit sill continuing, deal or no deal.

This has brought BoE year-end rate cut bets to about 31.1 percent according to overnight index swaps. This has somewhat undermined upside potential for GBP/USD even as the UK government was reported bringing forward “concrete Brexit proposals”. It is expected to be presented after the Tory Party Conference, taking place September 29 to October 2, ends.

Meanwhile, the pro-risk Australian and New Zealand Dollars gave up most of their upside progress after it was reported that the US was mulling limiting investment in China. This comes ahead of key meetings between the two nations set to take place on October 10 to 11. The MSCI Emerging Market Index dropped about 1.30 percent by the end of the session.

On a daily chart, GBP/USD closed just under near-term support at 1.2294 as it continues its descent from the falling trend line from March. Prices could soon target the former March 2017 low around 1.2109, in line with the dominant downtrend for the past 6 months. Otherwise, near-term resistance appears to be lows from April 2017 around 1.2366. 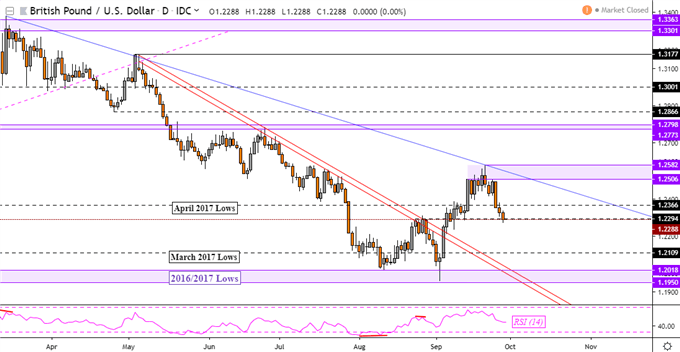