The US Dollar outperformed against its major counterparts on Wednesday on a combination of fundamental developments. Its rise picked up pace during the European trading session as the British Pound declined on the latest Brexit developments. While the UK Parliament is back in session, odds of a snap election have been on the rise after Prime Minister Boris Johnson’s prorogation was cut short.

During the US trading session, local new housing sales clocked in at 713k in August versus 659k expected, up from 666k. Then, US President Donald Trump said that the country is getting “closer and closer” to a trade deal with China, adding that there is a “good chance” one could happen. Local front-end government bond yields rallied. These rosy developments contrasted with gloomy consumer confidence data yesterday.

The S&P 500 rose 0.62 percent, but it fell short of recovering Tuesday’s 0.84% drop. Heading into Thursday’s Asia Pacific trading session, regional bourses – such as the Nikkei 225 – may follow Wall Street’s lead. A lack of critical local economic event risk also places the focus for currencies on market mood. A pickup in equities thus leaves the anti-risk Japanese Yen vulnerable. The sentiment-linked AUD and NZD may gain.

Wednesday’s performance in the Greenback meant that the DXY Dollar Index closed at its highest in over three weeks. That is broadly in line with its cautious uptrend, underpinned by a rising channel of support from the end of June (see chart below). That has left the US Dollar facing the psychological barrier between 99.08 and 99.37, but negative RSI divergence shows fading upside momentum which is a downside risk. 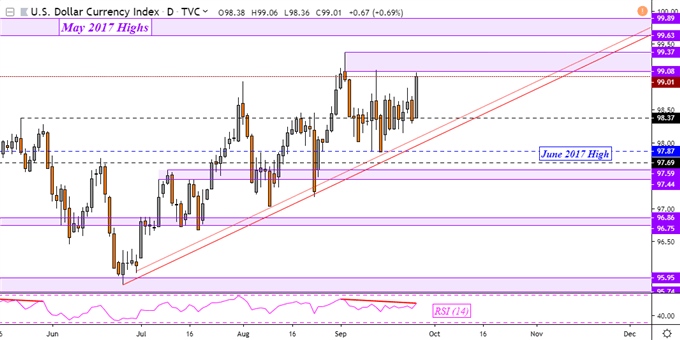