The pro-risk Australian and New Zealand Dollars underperformed over the past 24 hours, accumulating the majority of their losses during Thursday’s Asia Pacific trading session. There, we saw risk appetite deteriorate in the aftermath of the Fed interest rate decision, In particular, the Aussie was also battered by an overall disappointing local jobs report that firmed speculation the RBA could deliver another cut next month.

As the anti-risk currency, the Japanese Yen edged cautiously higher against its major counterparts, looking past the Bank of Japan monetary policy announcement. Instead, it focused on comments regarding US-China trade talks that caused equities to wax and wane. These are in focus in the near-term as officials gather to negotiate in the United States this week.

Initially, the S&P 500 and the MSCI Emerging Market Index rose as White House Economic Adviser Larry Kudlow said that “talks are proceeding”. However, those gains quickly turned around as Trump Adviser Michael Pillsbury essentially said that the President is ready to escalate tariffs if a deal is not agreed on soon. Wall Street ended little changed from yesterday’s close. The British Pound rose on the latest Brexit news.

The Japanese Yen will most likely look past local CPI data for August, especially with the BoJ planning on reviewing prices at the next meeting as monetary policy remains on cruise control. Rather, the focus for currencies will likely remain on sentiment and risk trends. All eyes are on the progress in US-China trade talks which could result in more sideways price action until the outcome is known.

On a daily chart, AUD/USD is accelerating its decline after topping at 0.6895 earlier this month, approaching levels that were last seen in March 2009. IG Client Sentiment is offering a bearish-contrarian trading bias, hinting that more losses could be in store ahead. This could pave the way for a push towards 0.6744 as the pair looks to retest lows set last month.

Join me at 00:00 GMT as I discuss the latest developments in market positioning leading into US-China trade talks 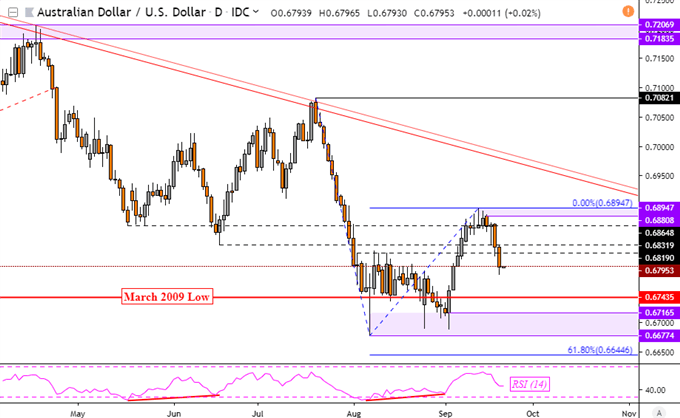