The US Dollar outperformed its major counterparts on Wednesday after the Federal Reserve delivered a rate cut that was accompanied with less-dovish-than-anticipated commentary. The markets were initially left disappointed – as anticipated - when it was revealed that officials were split on the need for more easing. Wall Street immediately turned red, but losses were trimmed afterward when Chair Jerome Powell spoke.

There, Mr Powell noted that should the economy weaken, more extensive cuts could be needed. He mentioned trade policy weighing on their outlook. Still, local government bond yields held onto their gains as well as the Greenback. Consequentially, the pro-risk Australian and New Zealand Dollars underperformed as they are USD’s liquid competitors for those seeking relatively high rates of return.

With the tepid performance in the S&P 500 on Wednesday (+0.03%), Asia Pacific benchmark stock indexes could be looking at a mixed start as the focus now turns to the next round of US-China trade talks. Officials from the latter have arrived in the former for negotiations this week. This is also what the NZD will be closely watching after a set of better-than-expected second quarter New Zealand GDP data.

Focusing on the upcoming Thursday Asia Pacific trading session, we do have the Bank of Japan interest rate decision which is due at an unspecified time. Policymakers are not expected to adjust their monetary policy setting tools. As such, the anti-risk Japanese Yen may look past the BoJ for developments in market mood. The Australian Dollar is also awaiting August’s round of domestic employment data.

Join me at 1:15 GMT as I cover AUD/USD and its reaction to the Australian jobs report

Despite gains in the US Dollar over the past 24 hours, the DXY still finds itself in consolidation mode. Though the index still remains in a slow and steady uptrend from the beginning of the year. It is being upheld by a rising channel of support from June – red parallel lines on the chart below. That may eventually pave the way for another retest of resistance which appears to be a range between 99.08 – 99.37. 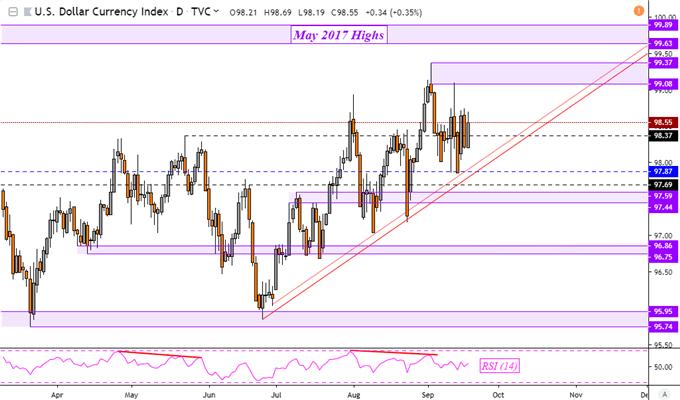