US Dollar Shrugs off Treasury Intervention Comment, AUD May Rise

The US Dollar shrugged off an announcement from Treasury Secretary Steven Mnuchin that the country does not intend to intervene on USD “for now”. US President Donald Trump has long made the public aware of his distaste for a stronger Greenback. The currency has been outperforming its major counterparts this year despite bets of easing from the Fed, likely owing to its status as a haven amid trade wars.

What is under “serious consideration” by Mr Mnuchin are plans to expand the portfolio of long-term bond offerings. Earlier this month, the Treasury was looking into 50 and 100-year bonds. Following today’s announcement, the 30-year government bond yield climbed. It remains to be seen whether direct intervention to weaken the world’s most-liquid currency occurs down the road.

Meanwhile, the British Pound underperformed against its major counterparts on the latest Brexit developments. Overnight, UK Prime Minister Boris Johnson received permission from the Queen to suspend Parliament. This is also known as prorogation and it effectively decreases the time members of parliament have to debate the withdrawal process, increasing the likelihood of a “no-deal” Brexit.

It was a mixed bag for risk trends over the past 24 hours. While Wall Street ended the day higher, the S&P 500 remains within a directionless range between 2820 and 2947 since early August. Continued uncertainty over the US-China trade war is one likely cause. There have been disputes from China over whether the phone call with Trump regarding restarting talks occurred at the G7 Summit in France.

Taking a closer look at AUD/USD, the currency pair is once again attempting to find follow-through after closing under the March 2009 low. Positive RSI divergence is still present and indicates fading downside momentum. A confirmatory close under 0.6708 opens the door to extending the dominant downtrend. A turn higher on the other hand places resistance at 0.6827. 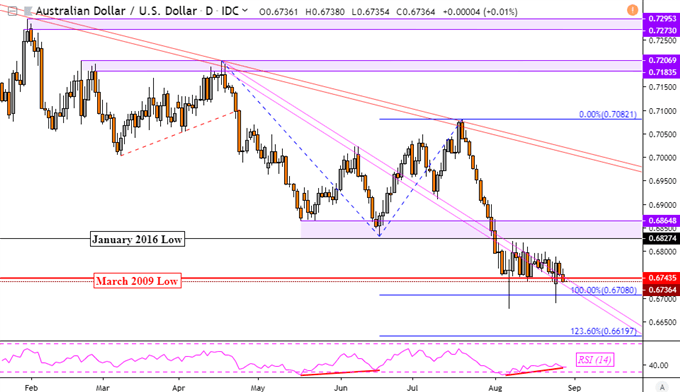